Student designs video game that does the laundry 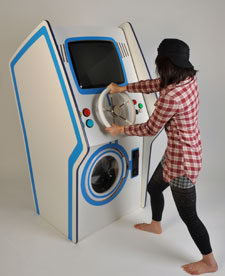 Not content with shooting alien invaders or zapping zombies, an MA student at Kingston University in south west London has designed a video game which involves doing the laundry.

Lee Wei Chen's "amusement washing machine" resembles an arcade style video console - but the bottom half of the unit is a washing machine. Lee Wei has linked the circuitry of the two devices, so that the washing cycle becomes dependent on the gamer's progress. If he or she struggles while playing the game, extra coins will be needed to complete the cycle.

Lee Wei, who is originally from Taiwan, said he wanted to find a productive use for the "wasted but enjoyable time" he spent gaming. "I realised that the skills I had developed in the virtual world were useless in the real world. I wanted to make them useful," the 27 year old explained. 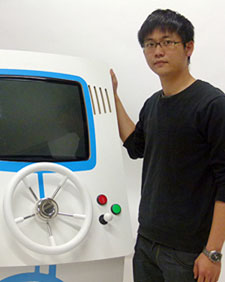 Players put three pound coins into the machine and are given three lives - this also turns the washing machine on. If players fail to progress beyond a certain level without losing their lives, the washing machine responds by refusing to move onto the next stage of its cycle and the player has to add more money.

"This is a big and original idea - examining the possibility of transporting the enjoyment and skills of electronic gaming into the more mundane world of practical electronic devices," Lee Wei's course leader, Colin Holden, said. "He's chosen two instantly recognisable objects - a washing machine and an arcade game - to illustrate this idea. Together the two objects produce a striking new electronic device. It's an extremely well-executed design concept."

He hopes his new design will help him realise his ambition of securing a job as a designer or engineer in the United Kingdom - before coming to Kingston he worked at an industrial design company in Taipei where he picked up technical skills that proved useful when he started building a video game washing machine. "I was attracted to Kingston 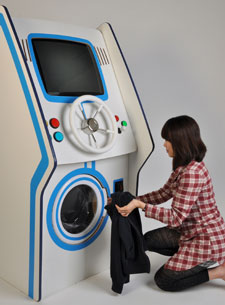 by the course," Lee Wei explained. "It's an MA in Design: Product and Space - so it's not simply about design, it's about how design fits into its environment."

Despite this, Lee Wei admits he's not very good at using normal washing machines. "I don't even know how to choose the programme," he admitted.

Lee Wei's game, and work by other students on the course, will form part of Kingston University's display at Tent 2011 at the Truman Brewery in London's Brick Lane from September 22-25 during the London Design festival.