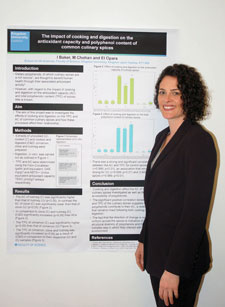 When a close family member becomes seriously ill it is a difficult time for everyone involved but not only has Kingston University student Iona Baker taken something positive from this experience, but dealing with her mother's sickness has even inspired a dramatic career change.

South African born Iona originally studied at the AAA School of Advertising in Cape Town. After having her first daughter during her final year of study she soon discovered that the working hours in the advertising industry were not conducive to bringing up a small child. Iona and her husband decided to move to the UK and she began to reassess her career options.

"I first began to take a real interest in nutrition after my mother became seriously ill with cancer and, later on, diabetes," Iona said. "When my mother had completed her treatment she also changed her diet and we found that this made a huge, positive difference to her health, which in turn made me realise how important the right nutrition is for chronically ill patients."

Although interested in nutrition, Iona's background had been in English and communications and she needed to get to grips with the scientific elements involved so completed an evening course in chemistry and biology at Kingston College. "The opportunities for adult education are much better over here than in South Africa and studying in the evenings really worked for me," she explained. The choice to go on to study a degree at Kingston University was not a particularly difficult one as Iona's part time Nutrition course allowed her to successfully juggle family life around her studies.

Not content with achieving a first class honours degree, the 35 year old mother of two from Teddington has just walked away from The Nutrition Society's 2011 summer meeting with a prize-winning piece of work after completing her lab-based project examining the behaviour of certain types of anti-oxidants called polyphenols in spices. With just a few short minutes to talk about her poster design and explain her ideas, Iona impressed the conference organisers. 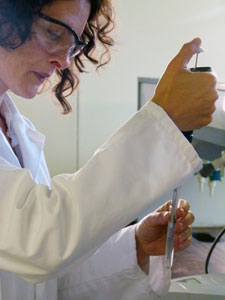 "My lab project looked at the link between polyphenol content and anti-oxidant capacity within spices and tried to identify a correlation between the two," Iona said, "Although the apparent relationship is not complete proof that one immediately affects the other, there is no denying the link."

Iona's poster was selected for the competition and eventually, as the winning design. "Winning the competition was a complete surprise." Iona said, "I was presenting my work alongside PhD students too which was incredibly intimidating."

Now with two daughters aged 6 and 12, Iona has just graduated but taking a break is the last thing on her mind.

Dr Elizabeth Opara, Principal Lecturer in Nutrition has encouraged Iona to continue her research at a postgraduate level which she is now doing. Iona's research, which will expand on her previous work, will involve looking at spices and their potential to reduce the risk of colon cancer.

"I was always very impressed with Iona's knowledge and enthusiasm for Nutrition." Dr Opara said. "She used to come up to me after lectures and want to discuss things that she'd read."

Fellow nutrition student Jessica Weston has also been celebrating her own success. Jessica also attended the Nutrition Society's 2011 summer meeting, where she was invited to talk about her dissertation topic, 'consumer use, understanding and perception of food labels'.

Jessica, 21,  said, "After studying Food Technology at A-level I became interested in the nutrition side of things, which was more appealing to me than straight food science."

Jessica's decision to come to Kingston proved the right one for her. "Studying at Kingston was ideal for me. Being close to London ­- but not too close - was perfect after moving from my home in Devon," She said, "During my first year I met all sorts of different people living in my halls and these have become great friends throughout my three years of study." 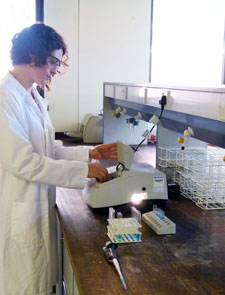 Jessica admitted that she had found some aspects of the course challenging. "I didn't realise just quite how science-based the Nutrition course was but I did come to really enjoy it," she added.

Putting her studies to good use, Jessica has just started working as a Technical Assistant for Food Technology at supermarket giant Sainsbury's, where her dissertation studies have proved especially useful.

Dr Opara has worked closely with both students and said she was particularly pleased with what they have achieved. "Both Iona and Jess have graduated achieving 1st class honours degrees. They are a credit not only to the Faculty, but to the University and their achievements have really put Kingston on the map with regards to studying nutrition."

Both students are tremendously proud of their academic achievements during their time at Kingston. Jessica said: "The highlight of the course for me was completing my final pieces of coursework on nutrition in developing countries." For Iona her new-found technical knowledge has been a personal achievement which has really improved her confidence. "I never thought I'd get my head around all of the science!"  Iona said, "But if I can do it anyone can."

Find out more about studying nutrition at undergraduate and postgraduate level at Kingston University.