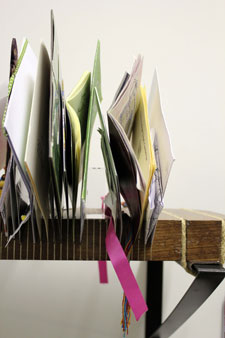 Many people will admit to having highly personal pieces of paper and precious possessions that have great sentimental importance but which hardly ever see the light of day. Yanchee Lau is most definitely an exception to the rule.

Rather than keeping an accumulation of clutter concealed in shoe boxes or stashed away at the back of a cupboard, Yanchee has designed a shelf to display the objects that are precious to him. Handwritten letters piled up amongst old photographs and torn off tickets have been given a new lease of life since he unveiled his design at the Tent London design exhibition as part of Kingston University show. These objects will be nestled alongside passports that have expired and gathered dust and random objects including ribbons and an orange comb.

Fascinated with the emotional attachment people have to such items, the 30-year-old MA student, originally from Manchester, was inspired to create a shelf to exhibit his collection of treasured objects.

"I'm interested in the clutter people hold on to in order to preserve memories that are attached to it," Yanchee said. "People place so much value on sentimental objects but they may as well not, as they are often kept hidden away out of sight." 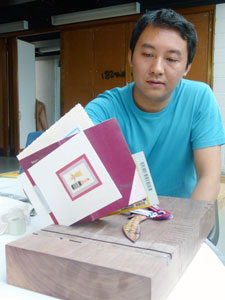 "My display will include a throw-away camera from back in 2005 when I took my mum to New York." Yanchee said. "I never got round to developing it and besides, it will probably be just more of the same - poorly taken and washed out photographs."

Yanchee's shelf, made from walnut, has been designed to house all of these different objects effectively. Yanchee has sawn a small number of grooves into the shelf to hold the paper pieces, while other objects are able to be displayed on the surface itself. Liquid gold leaf lines act as markers for new grooves to be cut into the wood and for new keep-sakes to be added as they are collected.  The shelf will fill up during the person's lifetime.

"It was a very conscious decision to use such prized materials for the shelf." Yanchee said. "It makes the sawing ritual more monumental - a real commitment for posterity - and so elevates the sentimental junk. To the outsider they are mere objects with no real value as they hold no memories, but to the owner they are special and worthy of display." Yanchee said.

Having previously completed a BA in Engineering at Cambridge University, Yanchee decided to study MA Design: Product and Space at Kingston. "I have been lucky to explore both the technical and creative aspects of design while I've been doing my course." Yanchee said. "I applied to Kingston University because of its prestigious reputation in art and design courses." 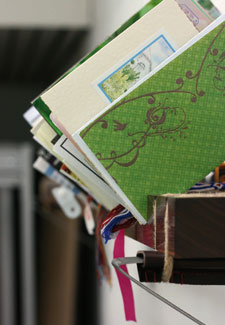 In between his coursework, Yanchee, whose parents are originally from Hong Kong, now works for engineering company Rambolls whose building projects vary from leaning hotels to underwater tunnels. The company even provided sponsorship for Yanchee to do his MA course at Kingston.

"Yanchee is the first student from a structural engineering background we've had on the course," senior lecturer Colin Holden said, "Interestingly, this background is not obvious in his final design.  Instead, the project stems from Yanchee's sensitivity and insight into a small detail of human behaviour. His piece challenges our understanding of an over familiar situation and provides us with a thoughtful and considered solution."

Yanchee exhibited his product at Kingston University's MA Design show at Tent London. The exhibition which ran from the 22-25 September at the Truman Brewery is one of the largest design trade shows taking place during the London Design Festival. "To get selected for the Tent London show is equally as important as getting my MA qualification as it is a wonderful opportunity to showcase my work," Yanchee said.