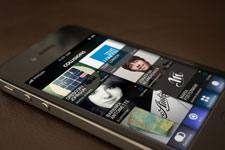 Any graduate hoping to embark on a career in the creative industries could tell you just how fierce the competition can be, but three design students from Kingston University aim to give themselves and their peers a helping hand with the development of their new networking app.

Thomas Valente and Andrew Gill, who have both just completed postgraduate degrees in motion graphics, have teamed up with MA Graphic Design student Michael Azzopardi and they have big plans to bring the creative community together with their new app.

The application, which the designers have called Momentum, is designed to work on smart phones and portable devices such as the iPad. It features several different elements, all intended to make interaction and networking within the creative industry more accessible to users on the go. 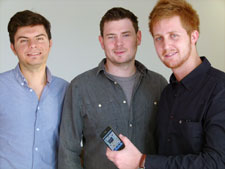 The trio's design was the winning entry in a competition which aimed to bring together creative people from East and West, as well as connecting designers closer to home in Britain. The project, instigated by Kingston Professor Catherine McDermott, was part of a wider scheme, called Connecting Contemporary Design, involving universities around the world.

"Our app is about building real connections and collaborations between designers," 23-year-old Thomas said. "It's a portable source of creativity and random inspiration that keeps you in touch with the design community around you, all through the simplicity of your phone. Digital dating for designers if you will."

The three students fought off stiff competition from other Kingston University designers as well as people from Korean University, Hongik, to carry off the winning prize - the chance to work with renowned graphic designer Malcolm Garrett.

A RSA Royal Designer for Industry, Garrett, whose most famous work includes the artwork for the Duran Duran album Rio, and projects for the likes of Boy George and the Buzzcocks, was instrumental in the success of the boys' app design and had inspired them personally as well as acting as their mentor, Michael, 24, said.

"Malcolm Garrett is a hero of ours so the chance to work with him was completely amazing and his advice has been invaluable," he said. The designer had genuinely seemed to be excited by the team's ideas, Thomas added. "I think that his guidance has really helped us to push our ideas further." 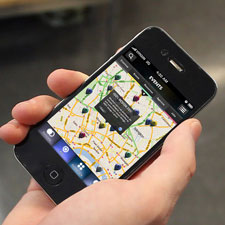 The app design features a way to keep track of portfolios and ideas that have been shared between designers as they move around. It also provides a source of information on surrounding events, agencies, jobs and design resources. The trio hope it will eventually include a jobs list to enable users to search for roles and locations relevant to their specialism. "Getting designers involved is the key to the project's success. Designers want to open up their app and see lots of activity and so do recruiters," Michael explained. "A whole design community is revealed in the palms of their hands."

The project was a great example of how designers could use new technologies to build professional networks that bridged the divide between university study and employment, the students' course director Ian Noble, who nominated them for the competition, said. "On the MA in Communication Design we ask students not only to employ their skills as designers, but we encourage them to develop entrepreneurial skills which can help to create new job opportunities," he added.

Although the idea is to share content and ideas, privacy settings will allow content visibility to be controlled should an individual require it. This is something that the students themselves were all too aware of during the app's initial concept stage. "Details were kept top-secret during development so we could perfect our ideas without any competitors swooping in and compromising our plans," Andrew, 27, said.

With the concept stage now complete, Thomas, Michael and Andrew are looking to take the project live and work with a developer to get the app up and running.