Students experience riot policing...from the safety of the classroom 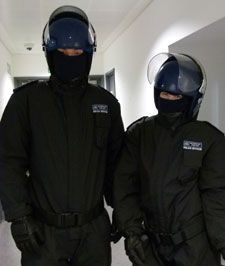 How do police plan and manage their involvement in public demonstrations? What is the benefit of kettling protesters and does it really work?  These were some of the questions that Kingston University criminology, forensic science and journalism students asked when they came face to face with riot police in a special training session.

The programme, run by the police's Territorial Support Group, aims to take the general public behind the riot shield and predict 'what happens next' as they watch a virtual demonstration unfolding before their eyes. The 25 students were challenged to see if they could make the decisions necessary when managing the fast-paced and volatile nature of a public demonstration.

Criminology student Anna Hoang was one of the students who took on the role of police officer for the day: "We were treated as if we were real officers, making plans and deciding what to do as a difficult situation unfolded at an imaginary public demonstration," she said.  "The Police can get a fair amount of criticism for the way they handle major events, so it was really interesting to get an insight into what's involved in policing them."

Working alongside experienced public order trained police officers, the students needed to change tactics quickly as the mood of the demonstration changed.  They had to decide, for example, whether to use more officers to control the situation, or whether to deploy those with full riot protection clothing and equipment and accept the implications this has on the tone and mood of the situation.

Forensic science student Hasan Demir said he enjoyed the experience of working with students from other courses.  When one of his group volunteered to wear the cumbersome protective equipment, the team realised they couldn't hear him or make sense of his gestures. "By wearing the kit, you became far more aware of the problems faced and the importance of communication," Hasan said.

Commander Michael Johnson, former head of the Territorial Support Group who set up the series of workshops, said the police were keen to visit various groups, including pressure groups and community organisations, to explain the tactics employed by police in these unpredictable situations. "It was good to see so many students willing to get involved. This workshop was a real opportunity for them to get hands-on experience of what it's like to be the commanding officer in charge of planning for and responding to this kind of event," he said.

There are more than 4,000 public events across the capital each year involving the police and the handling of such events can be the subject of intense media scrutiny.  Public order tactics, such as kettling or containment, were also discussed. "It's important that people should have the right to protest. The police aren't killjoys, but we have to make sure that people are safe and secure and we want to get that message across to a variety of different groups, such as students and protest groups," Commander Johnson explained.