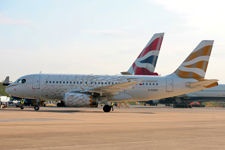 Golden doves, designed by a Kingston University lecturer, will take to the skies over London for this year's Olympic Games.

The liveries of nine British Airways jets have been reworked by Pascal Anson, 39, to look like doves. The first "Dove" - an Airbus A319 - has gold feathers along its fuselage, while the cockpit resembles a beak.

Anson's ideas for the planes were chosen from hundreds of designs submitted to the British Airways' Great Britons competition last summer. Part of his prize included mentoring by artist Tracey Emin, who unveiled the first repainted aeroplane at London's Heathrow Airport just before Easter. A team of 24 people took eight days to spraypaint the aircraft with Anson's designs.

The lecturer, who teaches students on several courses at Kingston including graphic design, interior design and the University's art and design foundation course, has a history of redesigning vehicles. Two years ago, he livened up his car by covering it in stick-on wood-effect floor laminate - and doubtless drew surprised glances from fellow drivers on his commute to Kingston from his home in Brighton.

Doves are an Olympic emblem having featured regularly at opening ceremonies, including the last time the Games came to London in 1948.

"I never wavered on the concept - I knew how I wanted the dove to look. But we did have to adapt our ideas a bit to address some technical difficulties," Mr Anson said. "The idea always has to come first. The realisation and the practicalities come second. I hope that's something I can pass on to my students."