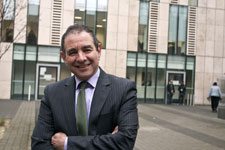 Universities Week is a national campaign to promote the valuable contribution universities make to society and the economy, especially within their local communities.

Following on from the success of the first two events in 2010 and 2011, this year Universities Week is back with even more events and activities, involving more than 100 universities and supported by hundreds of business leaders and celebrities.

Special events in Kingston for 2012 include a community day at the University's Kingston Hill campus on Wednesday 2 May and activities in Kingston Market Square on Thursday 3 May. There will be music and dance performances, opportunities to witness a mock trial, become a stock trader or take a tour of the nursing training lab. Also back by popular demand are the University's famous electric racing bike, mini robots and cheerleaders. 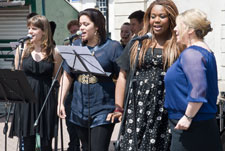 Kingston University Vice-Chancellor Julius Weinberg believes the Universities Week campaign can show people in the local community what their university can do for them. "Higher education doesn't just benefit those who go to college to study for a degree," he explained. "Kingston University, for example, also contributes hugely to the region's cultural, educational and social life both through public lectures, exhibitions and performances and by opening up its sporting, health, conference and other facilities to local residents, businesses, and community organisations."

With an annual budget of almost £205 million and more than 2,500 staff, Kingston University is also one of the town's largest employers, contributing significantly to the local economy. "The standard calculation is that the economic impact of a university is two-and-a-half times its budget - so in Kingston's case that's approximately half a billion pounds," he added.

The University's staff and students are also active in the local community, offering 3,500 hours of service to good causes each year through its award-winning volunteering scheme and there is also an extensive school visiting programme, offering educational support and encouraging local children to aim for university.

"In the face of funding reductions and increasing tuitions fees, there had never been a more important time for universities to highlight how crucial they are to the nation's economy, to the health of our society and to the ability of individuals to achieve their full potential," Professor Weinberg said.