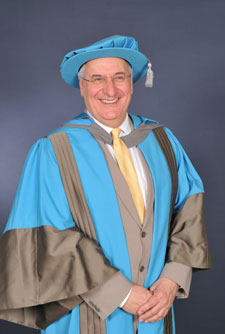 One of the country's leading medical educators has been awarded an honorary doctorate to mark a career spanning almost four decades in higher education and the NHS.

Professor Sean Hilton received the accolade from the Faculty of Health and Social Care Sciences, run jointly by Kingston University and St George's, University of London. The award recognises his work in medical education at St George's, where, for 25 years, he has been an integral figure spearheading teaching innovation. His career has also included 30 years working as a partner at Canbury Medical Centre in Kingston upon Thames.

Professor Hilton qualified as a doctor at St George's in 1974, and returned in 1987 as a part-time senior lecturer. In 1993, he became a professor and head of the Department of General Practice and Primary Care.

In his time at St George's, as Dean of Undergraduate Education, Vice Principal (Teaching and Learning) and Deputy Principal, Professor Hilton worked to ensure the university was at the forefront of developments in medical education. He was a key member of the team that introduced the country's first medicine degree for graduates, a model now used by many other medical schools.

Professor Hilton has also notched up nearly 40 years' experience working for the National Health Service, including eight as a board member of St George's Healthcare NHS Trust. He will retire this July, leaving his current roles at St George's as Head of the Division of Population Health Sciences and Education and Director of International Affairs.

"It has been a great experience to work with so many colleagues from different disciplines and I shall certainly miss them," Professor Hilton said. "Receiving an award from the Faculty is a wonderful way to say goodbye and is especially gratifying as I've spent so much of my working life in and around Kingston and have a huge affection for the area. "I was delighted to be honoured alongside the students from the Faculty of Health and Social Care Sciences, who should all be immensely proud of their own achievements," he added.