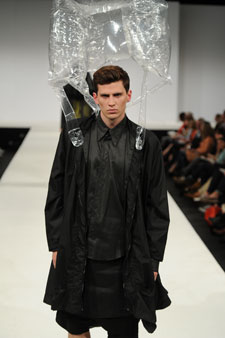 A student at London's Kingston University has unveiled a gravity-defying collection during Graduate Fashion Week. Penelope Tucker created a line-up of menswear that included a bouncing parka activated by walking. It was inspired by watching skateboarders flying through the air and some of her garments were even filled with helium to make them float upwards.

"The collection is based on gravitational pull," the 22 year old explained. "From the viewer's perspective, it appears that skateboarders are defying the laws of gravity - although of course they aren't really, they're actually using them to their advantage."

To achieve the desired effect, Penelope made hoods out of clear Mylar foil - the same material that helium balloons are made from. "Mylar is the only material I could find that is durable enough to contain the helium while also being light enough to float when it's filled with the gas," she said.  "It makes the hood appear as though it's floating above the model." 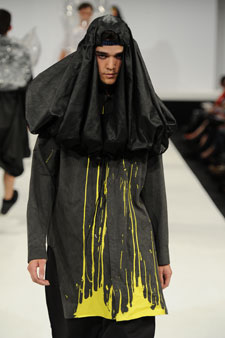 All Penelope's looks involve elongating the human figure, with deep pockets and extended trousers. In some, she's retained the skater influence by combining hoods with peaked caps. In another, she's stripped the duck down out of a set of luxurious pillows to make an oversized padded gilet which appears to float above the body.

Penelope, from the Shropshire village of Coalbrookdale near Telford, isn't a skateboarder herself but says she is intrigued by the sport. "What they appear to do is create an optical illusion, which is exactly what I'm trying to do with my looks. It's a collection that draws on both sport and science," she said.

Senior lecturer in Kingston University's Fashion Department Andrew Ibi said he had been impressed by the way Penelope approached the project. "You see the whole skater fashion thing everywhere but Penelope has managed to find a new take on it," he said. "She's kept some of the key elements - the large sizes and the baseball caps - but she's quite literally turned it on its head. She's made it really enjoyable with the helium hoods.

"I know she wants to set up her own fashion house, but I have warned her that there'll be plenty of people out there trying to offer her a job once they've seen her collection," he added. 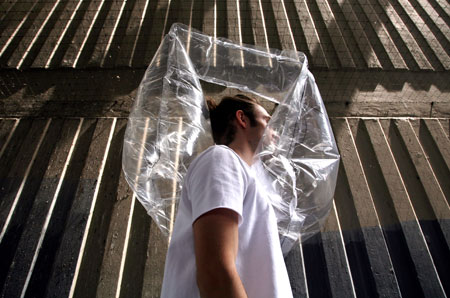