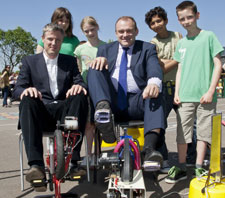 Community action to generate clean, local energy and use it efficiently is critical if Britain is to create a low carbon economy, according to Kingston MP and Secretary of State for Energy and Climate Change Ed Davey. "This drive to change can't just come from Government or the big energy companies because, let's be honest, people sometimes find it difficult to trust them," he said. "People are influenced by their friends, their neighbours, the church and local community groups, so, unless we do things differently at a community level, I don't think we'll be able to make the changes we must make if we're to tackle fuel poverty and lower our energy usage in Britain."

Mr Davey was speaking at an event to mark the first anniversary of the Smart Communities project - a programme launched by Kingston University to help borough residents develop green habits and reduce their energy consumption. North Kingston MP Zac Goldsmith, who launched the project last May, was also at the event at Fern Hill Primary School and was photographed alongside Mr Davey putting electricity generating bikes to the test. 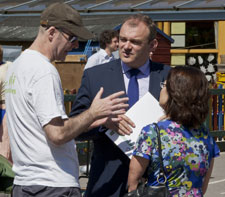 Project leader Professor Ruth Rettie, from the Behaviour and Practice Research Group at Kingston University's Business School, said the partners and participants, which included Fern Hill Primary School and more than 350 households in the Kingston area, had wholeheartedly embraced the ideals behind Smart Communities. "We have been overwhelmed by what the community has been able to achieve by working together," she said. "Everyone who has signed up has received a free energy monitor, people have been eager to adopt greener practices and many have come to the energy workshops we set up or had energy audits carried out on their homes. Some have even hosted a thermal imaging party."

Richmond Road resident Peter Wood was one of the first people to get involved in the project, eager to make his household more energy efficient. "We joined Smart Communities because our bills were too high and we thought we ought to know what electricity we were using," he said.

Fiona Pullen, from Park Farm Road, said the project made her feel she was doing her bit for the environment.  "As individuals, people often feel they can't make much of a difference, but, as part of Smart Communities, you really feel that you're all doing something," she added. 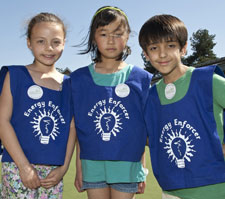 One of the highlights of the anniversary event was a drama production by children from Fern Hill Primary School. The pupils had been asked to consider what would happen if someone came along and took away all the energy in the world, Professor Rettie explained. Directed by Louise Pendry from community drama organisation Bounce Theatre, the children had developed the story of the Energy Collector, with each year group creating dramatic sketches, poems, drawings, stories, videos and voice recordings. "The activities were all designed to stretch the children's imaginations and to encourage them to think creatively about energy," Professor Rettie said. "The pupils have been so inspiring and we hope they will pass on what they've learned through Smart Communities both to their parents now and to their own families in the future."

Mr Davey stressed that what was smart about the project was that the whole community had realised that the cheapest energy was energy that was not actually used. "Unless people feel it's normal to worry about energy efficiency, we can't make the giant step change that's needed," he added. "Projects like Smart Communities, which are actively finding ways to change perceptions and behaviour, are exactly what we want to see right across the country - and Kingston is definitely leading the way."