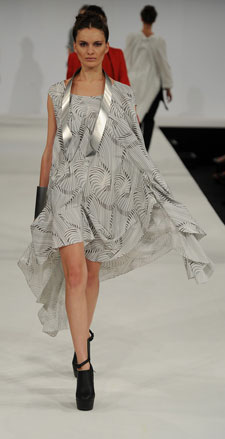 Fashion designers normally try to make sure their collections are perfect down to the tiniest detail. But a Kingston University student has gone to the opposite extreme - she's created a Graduate Fashion Week collection full of deliberate mistakes.

22 year old Vic Riches' womanswear range, entitled Defects and Remedies, is full of asymmetric garments, eccentric tailoring and apparent mismatches. "The errors had to look clear, deliberate and bold, really exaggerated," Vic said. "It had to be obvious that they were meant to be mistakes.

"It was a very tough compilation to assemble. Working out how to rectify the defects was like doing algebra. It reminded me of simultaneous equations - and I hated maths at school. But this was a very enjoyable process and I got to try out methods I hadn't used before."

The outfits somehow manage to fit perfectly while, at the same time, appearing misshapen. Vic's collection uses bold colours ­­- blood red, sky blue and steel grey. The shirts all have oversized pleats and began life as experiments using leftover cuts of cotton, while three of her looks feature shirt cuffs without sleeves.

One of the dresses appears to retain numbers and lines from the pattern used to create it. "I wanted to dye two of the panels on that dress off-white and didn't know what to do, so I used some tea in the sink in the staffroom kitchen and it worked perfectly," Vic said.

The collection has been funded by Vic's drawings. She was commissioned to illustrate Fashion Bites, a book of spicy quotes about the industry, and is regularly hired to sketch weddings by couples who want something a little different to a traditional photographer. 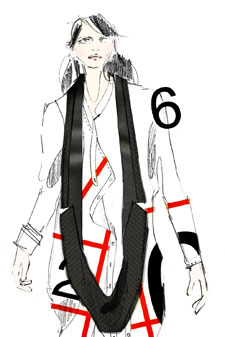 "During my first year, I sent some illustrations on spec to fashion blog Style Bubble which then commissioned me to do some more. Other people spotted them and I've also been working for several popular magazines and retailers.

"The editor of one magazine asked me to cover her wedding in Florence," she continued. "Word got around and I was interviewed by Brides magazine. After that, I've had people ringing me up the whole time - often a year and a half in advance. I normally do about 20 sketches at a wedding. I have to work quite fast - there's no time to plot them out first."

At the end of her second year, Vic won a competition run by Kingston University, with the prize of a three-month internship at Old Navy. The San Francisco-based designers were so impressed with her that they have now offered her a full-time job as a womenswear designer. Deciding to go to California was a difficult decision as she had also been offered a scholarship to study for an MA at Parsons School of Fashion in New York.

"Someone like Vic comes along very rarely," Kingston University academic director of fashion Elinor Renfrew said. "Her final collection typifies her approach throughout her time at Kingston. She's set out to stretch herself, to find out how she can repair designs that most of us would regard as damaged beyond hope. In the process she's learned a great deal about fashion - and also, I think, about herself." 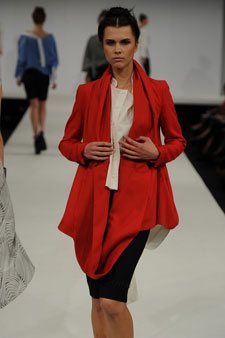 Vic, from Saffron Walden in Essex, has strong family ties to Kingston. Her aunt studied illustration at the University, while her younger brother is doing interior design. "All my immediate family work in the design world. My father has his own graphic design company while my mother is an illustrator who has branched out into garden design," she said.