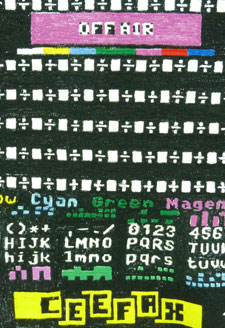 The Olympic legacy, waterless washing, a heartfelt tribute to Ceefax and an un-knitting machine -  these were just some of the ideas recently on display at Kingston University's Faculty of Art, Design and Architecture's undergraduate degree show. The annual event traditionally features a wide range of final-year projects encompassing product, furniture, interior and graphic design, fine art, photography, illustration and animation, fashion, film-making, architecture and landscape. This year, student designers devised a toothbrush made from seaweed, a ceramic pencil sharpener and an entire dictionary composed of the first pictures that appear when people search for words in Google Images.

Among the work on display was Imogen Hedges' un-knitting machine. Her starting point for the project was the discovery that some charity shops devoted hours to unravelling home-made jumpers. "They can make more money out of selling the wool than they can from the sweaters," the 22-year-old product and furniture design student explained.

The machine is based on pedal power and built around an old bicycle frame. The un-knitter sits on a chair pedalling and wool passes through steam coming out of a kettle before being collected on a spindle.  "My grandmother spent the whole time knitting sweaters but my mum threw them all away once we'd grown out of them because she didn't think anyone would want them. With my machine you'd be able to take them apart and knit something new," Imogen, from Milton Keynes, said.

Of course, the wool collected in the un-knitting machine doesn't have to be used to make garments. Kingston University graphic design student Aaron Merrigan produced a tapestry tribute to Ceefax - the BBC's text news service, which will come to an end later this year when the switch from analogue to digital television is complete. 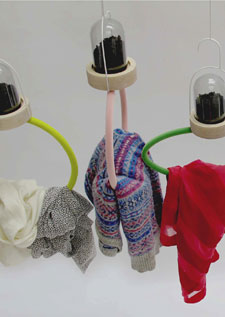 Meanwhile, product and furniture designer Lisa Bengtsson created a set of equally colourful hangers, which she entitled 'Bye Bye Laundry'. Lisa, from Lund in Sweden, is urging householders to forget water, washing powder, fabric conditioner and softeners. In the future, she believes all householders will need to revive clothes is charcoal.

"Activated charcoal is already widely used for purifying the water in fish tanks or animals' feeding bowls and it can absorb the odours from a piece of clothing even if it's held a metre away from it," the 24 year old said. "Today we wash our clothes much more than we need to and it harms both the garments and the planet. A worn item very often doesn't need to be cleaned, but merely freshened up."

Lisa produced a set of five circular holders, each containing granules of charcoal, from which clothes can be hung. "I've covered the rings in flocked velvet, to give them a touch of luxury and prevent the clothes falling off," she said. "I wanted them to be an attractive feature that people would be proud to have in their homes."

Meanwhile, all Kingston's architecture, landscape and interior design students focused on the idea of legacy, which is central to the Olympic and Paralympic Games. "Their projects, set across the capital's host boroughs, considered not only the immediate and future possibilities and consequences of the Games themselves, but also the culture, values and history of London's East End and the people who live and work there," head of school Daniel Rosbottom explained.

Hundreds of people went through the doors of the show, which ran until June 22. "I believe the work demonstrated the very special character of art, design and architecture at Kingston University," acting dean of the faculty Dr Trevor Keeble said. "Our students displayed a readiness to use their creativity, innovation and skill to question, shape and improve the world around them, wherever they might find themselves in the future."