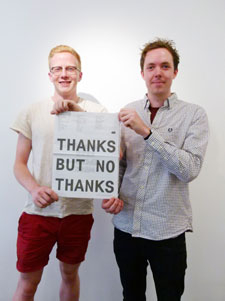 Left on the shelf, unwanted and abandoned - two graphic design students from London's Kingston University are helping homeless hounds and moggies at Battersea Dogs and Cats Home through a novel exhibition featuring rejected works of art.

The exhibition, entitled Thanks But No Thanks, came about after Alex Brown and Ben West submitted a poster design for a competition. Although the pair were unsuccessful with their entry, the outcome got the design duo thinking.

"I was really pleased with the poster we'd put together so had already decided that we would have it printed anyway," Ben said. "It prompted us to think about the creative industry as a whole and how many artists and designers must have had similar experiences with their work perhaps being turned down or discarded when the designs weren't quite right for the intended brief."

Writing more than 200 letters to graphic designers, the students set about rounding up unwanted, unused and unfinished projects in the form of prints, paintings and posters. "It took a while to get all the pieces together," Alex, 24, from Eastbourne, said. "We persevered though following up our letters with emails and phone calls and eventually the donations started coming in." 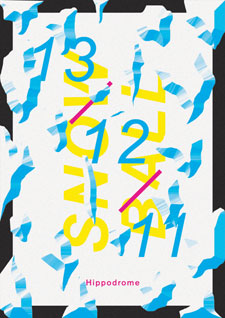 Once the artwork was in, Alex and Ben set up the exhibition at the Beach Gallery, London where it ran from June 1 - 6. Work on display ranged from a rejected poster for the 2014 Winter Olympics by Wally Olins to a hand lotion bottle by studio BOB Design that Space NK didn't want. There was even something for music lovers in the form of an abandoned Bob Dylan portrait by graphic designer Ian Wright.

The show culminated in the donated designs being sold with the money going to the Battersea Dogs and Cats Home. "The intention was always for the project to raise money for charity," 23 year old Ben, from Braunton in Devon, explained. "Donating the proceeds to Battersea Dogs and Cats Home made perfect sense as the exhibits - just like the animals at the centre - had all been abandoned and rejected."

The auctioned artwork raised a grand total of £700 for the pet charity. Bids ranging from £5 to £50 were placed for individual pieces, with an unused illustration designed for Girl Talk magazine, donated by artist Rob Ryan, fetching a top price of £75. "There was no way of knowing how much money each piece was going to make," Ben explained. "At the end of the day, it was all down to what people liked. Although Rob Ryan's illustration wasn't right for Girl Talk magazine, someone else loved it and just had to have it." 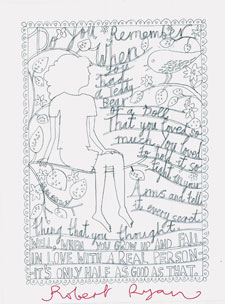 Similarly, Alex was so taken with a piece donated by designer Marion Deuchars that he bought it himself. "I think one of the reasons I like it so much is because it's hand drawn," he said. "We were keen to receive items that showed the process and not just the finished, polished pieces."

Alex and Ben have just given the Thanks But No Thanks exhibition another airing at Kingston University's Faculty of Art, Design and Architecture undergraduate degree show. More of their work will be on display at Drays Walk Gallery in London between July 5 and 8.