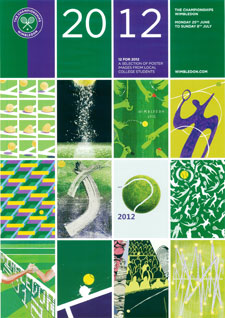 Not a single, or even a double, but a dozen designs by students at London's Kingston University will be on display this Wimbledon fortnight in the shape of the tournament's official poster.

The distorted shape of a tennis ball as it hits the grass at more than 100mph, the applause of the crowd and the final handshake of the players across the net - all these tennis moments are captured in this year's official Wimbledon artwork designed by Kingston University students.

The budding artists, who are studying illustration and animation or graphic design at the university in south west London, responded to a brief set by the All England Lawn Tennis Club and Hat-Trick Design Agency.  India Harvey, 22, whose illustration shows the shadow of a player poised to serve, wanted to show the tension of the moment just before the ball is hit.  "In the build up to the serve, there's a split second when it seems as if the ball is suspended in mid-air above the outreached hand of the player," India explained.  "When this is captured in an image, people can begin to understand the mathematical precision and considered movement needed to win at Wimbledon." 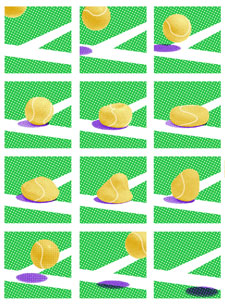 The students had just one week to get their designs down and were chosen from more than 50 entries.  "Being given a short deadline forces out your best ideas," illustration and animation student James Jessiman explained. He looked at the distorted shape of tennis balls as they hit the grass at high speed for his design.  "For a lot of us, this was our first client brief and it was a great challenge to tackle the identity of an English institution such as The Championships."

Each individual picture uses the familiar Wimbledon Championship colours of green, purple and white. While all but one feature tennis balls, none feature the rain.  The winning students saw their work unveiled at a special afternoon tea in their honour at the All England Lawn Tennis Club hosted by its chairman Philip Brook. They will also get the chance to see the artwork along with almost 40,000 other daily spectators as they were each given tickets as a prize.

Academic director for communication design at Kingston University Rebecca Wright said having 12 pieces chosen by such a prestigious client was a real credit to the students.  "They've really captured the colour and atmosphere of Wimbledon and I'm delighted that their work will be seen by thousands on such an international stage as The Championships," she said. 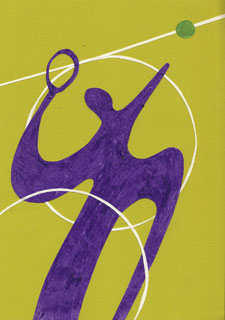 Mick Desmond, Commercial Director at All England Lawn Tennis Club, said it had been its ambition to work with the local community for this year's Championship artwork. "Kingston University was recommended to us by our design agency, and together we wrote a proposal to invite the students to bring Wimbledon to life in their own way," he said. "We were very pleased with the students' responses to our brief. We selected 12 for 2012 and are delighted with the finished result."