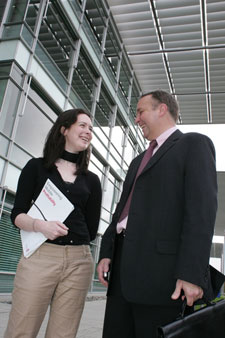 High levels of engagement could actually be damaging for organisations if overly simplistic staff surveys mask the type of engagement at play within an organisation, according to new research from the Kingston Business School and the Chartered Institute of Personnel and Development (CIPD).

The study found a key difference between types of employees. Those who were involved only with the task at hand - known as transactionally engaged - tended to respond positively to staff surveys, but were often likely to leave quickly for a better offer.  However, those who were very positive and felt strongly about the organisation's mission and values, dubbed emotionally engaged, were more likely to perform at a higher level and remain committed through good times and bad.

"The research has identified the clear difference between the people who are primarily working just to make money and have no specific feelings and ties to their employer, compared with those staff who have a closer emotional attachment to their employers," Dr Stephen Gourlay, Deputy Director of Kingston Business School's Centre for Research in Employment, Skills and Society (CRESS) said.  "The former group are likely to perform their job reasonably well, but the latter will often go out of their way to carry out additional tasks."

The researchers identified so-called transactional engagement as being shaped simply by employees' concern to earn a living and to meet the most minimal expectations of their employers.  Emotional engagement, meanwhile, is influenced by different aspects of work that go beyond the job role itself, including relations with colleagues, line managers, the organisation and clients or customers.  It is driven by a desire on the part of employees to do more for the organisation than is normally expected and in return to receive a more fulfilling psychological contract, i.e. to feel more valued.

High numbers of staff displaying transactional engagement were found to be potentially damaging for both individuals and the organisations they work for.  This kind of employee - those just working for the money - reported higher levels of stress and difficulties in achieving a work-life balance than those employees who were emotionally engaged.  They were also found to be more likely to indulge in behaviour which could actually damage the organisation than their emotionally engaged counterparts.

"Our research reveals that this whole area of engagement is much more complex than has been portrayed in the past," Dr Gourlay added.   "Now further work is needed to examine this more thoroughly."