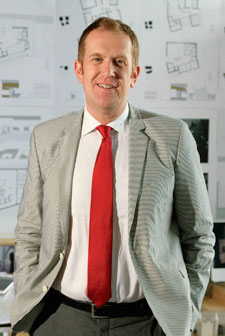 The new head of Kingston University's Faculty of Art, Design and Architecture has called on politicians not to think of a university education as simply being about three years of training. "We're educating people for life in a rapidly changing world in which they will face challenges that we can't even imagine yet," Professor Steven Spier, who has just been named Dean of the faculty, said. "We can't lose sight of the fact that the education we provide will help determine how people's careers develop - in part how their lives develop."

Professor Spier, who is a leading expert on contemporary Swiss architecture, is joining Kingston after two years at the University of Ulster where he has been head of the School of Architecture and Design. "I chose to come to Kingston because it's one of the best art schools in the United Kingdom and because London is one of the most important centres for the creative industries anywhere in the world," he said. "As a trained architect, the post was also appealing because architecture and built environment at Kingston sit alongside fine art and design rather than engineering. This is uncommon in Europe."

Professor Spier takes on the role just as the new fees regime introduced by the coalition Government comes into effect. He believes universities will have to work harder to demonstrate their worth, but that art and design education can readily meet the challenge. "Its value isn't as immediately obvious as that of a business or a vocational course, but art and design education helps us make sense of the world around us. What's more, it teaches students to be entrepreneurial, flexible and responsible for their own learning," he said. "We have to make it clear that it's a valuable education for life. We need to get out there and show the world the interesting and relevant things we do."

With a Finnish mother and American father, Professor Spier was born in Canada, brought up in the United States and holds four passports. He has a broad liberal arts education with a Bachelor's degree in philosophy from Haverford College in Philadelphia. "Being educated for life has influenced my approach to education to this day," he said. "I had to study the natural sciences, the social sciences and a foreign language before I majored in philosophy."

After a spell working in New York, he studied for his Master's in architecture at the Southern California Institute of Architecture. He then travelled to Germany to work in practice. "The Berlin Wall had only just come down and I was living in what used to be East Germany," he said. "It was a pretty tough time in the former East and like the Wild West in the West."

He remained in Europe, moving to the world-renowned Swiss Institute of Technology in Zürich ETH to teach. His first position in Britain was at London South Bank University, before he moved to the University of Strathclyde, where he was head of the School of Architecture for six years. In 2006, Professor Spier was appointed founding principal of the new HafenCity University Hamburg in Germany, which specialises in urban planning, architecture and civil engineering. After four years, he returned to the United Kingdom to take up his most recent post at Ulster, while living in Glasgow. 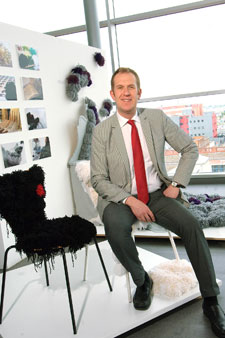 Professor Spier has two major research areas in which he has published extensively. The first is contemporary Swiss architecture and the factors that have allowed a relatively small country to attain an international reputation for the excellence of its architecture. His book 'Swiss Made', which has been published in the United Kingdom, Spain, Germany and the United States, was chosen as one of the books of the year by Architects' Journal in 2003.

His other area of expertise is choreography as a form of spatial organisation. "What I try to do is think of choreography as a way of organising people within space - which is also what architecture aims to do," he explained. He has recently edited the first English-language book on the renowned choreographer William Forsythe, 'William Forsythe and the Practice of Choreography. It Starts from Any Point'.

Professor Spier has links with a wide range of cultural institutions in Scotland. He was appointed to the board of Architecture and Design Scotland when it was established in 2005, is an honorary fellow of the Royal Incorporation of Architects in Scotland and is on the board of Scottish Ballet. He has recently been made a director of Glasgow-based and internationally-renowned producing art house Cryptic. When asked for advice for students at his new faculty, Professor Spier quotes Cryptic's slogan: "Stay curious".

Further afield, he has been honoured by the Association of German Architects (BDA), has advised the Austrian Government on the development of its art colleges and reviews research proposals for the Austrian Science Fund and the Commonwealth Scholarship and Fellowship Plan. He has sat on the Royal Institute of British Architects judging panel for design awards and the equivalent panels in Scotland and Northern Ireland.

"Kingston's art, design and architecture courses already have a formidable reputation and I am confident that, as an expert in architecture, Professor Spier will build on this," Kingston University's Vice-Chancellor, Professor Julius Weinberg, said. "His insights into universities in the United States and on the continent will be immensely valuable as British higher education enters a new era."