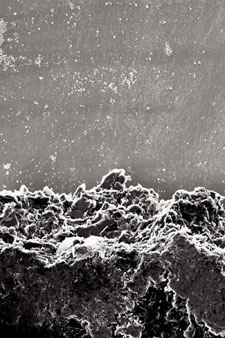 A jagged mountain range, a star-lit sky, a saw-toothed coastline - not the typical contents of a person's stomach but these are the products of a photography experiment that saw two Kingston University students swallow 35mm film and frame the results.

Graphic design and photography students Luke Evans and Josh Lake decided to let their bodies do the processing for their end-of-year project. They swallowed squares of film, safely held in a plastic capsule,  for 'development' in their stomachs and intestines. Exposed only to internal fluids, the celluloid revealed its journey with a series of marks, scratches and bumps that, under an electron microscope, created the dramatic shapes captured in the images. The resulting images were revealed under the microscope, enlarged up to 500 times and then blown up to poster prints of 15,000 by 10,000 pixels.

"The film was not exposed to light during the experiment, but it has created images nonetheless," 20-year-old Luke, from Herefordshire, said. "Josh and I have both grown up in the age of digital photography and, of course, nowadays everyone carries a camera around with them on their phones so there's something fascinating about going back to film because of its texture, its thickness and the way it reacts to being touched." 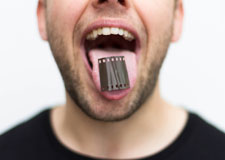 The creative duo said they wanted to explore the possibilities of 35mm film at a time when its popularity had diminished. "We're quite nostalgic, I suppose," 24-year-old Josh, from Bristol, said. "Film is something that has a lot of rules surrounding its use, but who's to say that these always have to be followed?" The two first year students were responding to a brief they had been set by their lecturers at Kingston University. "The title was 'Outdoor'. What we decided to do was take things that are normally hidden inside our bodies and display them outside," Luke explained.

Spectators have described the images as looking like maps, sculptures, electrical storms or landscapes. "I feel as though you can really lose yourself in the prints. There's so much detail that you can scrutinise the pictures again and again and keep finding different things," Luke said.

While the work has divided opinion in the art and photography worlds, it has sparked enormous public interest with the pair even being featured on Channel 4 News for their exposure-less endeavour. "A lot of people think that because no light was used it's not photography. Technically that's true, but we feel it doesn't make it any less intriguing and doesn't devalue the work at all," Josh said.  "If anything, disregarding light and exploring the other characteristics of film is more appealing to us. Just the fact that people are talking about our images - positively or negatively - is why we think the project has been so successful."

Senior lecturer in photography Paul Jenkins said Luke and Josh had not only recognised the importance of film but had pushed its application to create something new. "The images look like the landscape of a country or planet that we've never seen before," he said. "The medium is traditional but the approach is not, which is what makes this project so exciting."