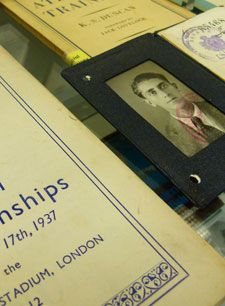 The collection, held at London's Kingston University, was kept by the late Vane Ivanovic, a member of the Yugoslav team who ran the 110-metre and 400-metre hurdles in the 1936 Games.  Ivanovic is believed to have been among the athletes who refused to give Hitler the Nazi salute at the event.  Yugoslavia had previously threatened not to attend the Games because of Nazi policies.

"At the opening ceremony, quite a number of athletes refused to acknowledge Hitler with the Nazi salute and reportedly Ivanovic was one of them," Professor Peter Beck, Emeritus Professor of History at Kingston University and author of 'Scoring for Britain' (1999) said.  "The 1936 games were a huge propaganda coup for the Germans - reinforced of course by the fact that they topped the medals table.  Although Ivanovic was a sportsman, it appears that he viewed the Games as a political event and in refusing to acknowledge Hitler would have been trying to undermine the propagandist impact of the event."

Around 4,000 athletes - including Great Britain's 208-strong squad - took part in the Berlin Games in the summer of 1936.  The German team won the Games with a medal count of nearly 90.

A key piece in the collection is a photo of Wartburg Castle in Eisenach, Germany, which Ivanovic had signed by many of the athletes and other well-known figures he met at the 1936 games. Among the names whose signatures he collected are famous American sprinter Jesse Owens, who won four gold medals, and the British Gold medal-winning relay team. Also featured on the photo is the signature of Harold Abrahams, whose story inspired the popular and recently re-released British film Chariots of Fire which has also been adapted for the London stage. In celebration of London 2012, this signed photograph has been restored and digitised by Kingston University Archives and can now be viewed online by the public. 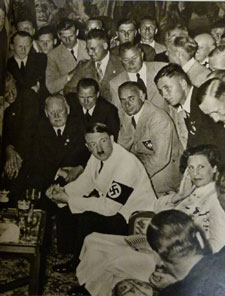 In one rare image from a commemorative magazine collected by Ivanovic, who died in 1999, the German Olympic winners are pictured surrounding Hitler who is wearing a distinctive white suit. An official 1936 Olympic commemorative programme is also among the documents which the athlete kept for posterity. The front cover of the programme shows the Eagle, which the Third Reich adopted as a national symbol, atop the Olympic Rings, with the inscription "I call upon the youth of the world".

As well as being a successful athlete, Vane Ivanovic was a shipping magnate, diplomat and philanthropist.  During the Second World War he was able to use his wealth and connections on behalf of the Allied Forces in a number of ways behind the scenes, persuading other Yugoslav shipping owners to make their ships available to the allies.  During his many years of exile from Communist Yugoslavia after the war, Ivanovic worked towards a democratic and united Yugoslavia.