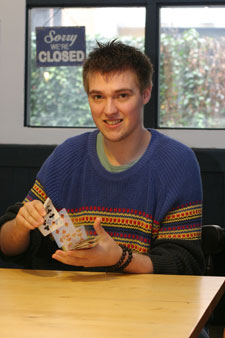 One year after calling Kingston University's Clearing hotline, award-winning magician and student Paul Brown is already working his business magic to make sure his career on stage can pay its way.

When he's not writing essays, Paul, 27, is wowing audiences with his Alchemy magic routine turning copper coins to gold. He believes the place offered to him by Kingston University to study business systems management as a mature student has also proved to be a golden opportunity.

"My first attempt at university was studying chemistry at a college far from home," Paul explained. "Unfortunately it ended after only a year when I realised the subject just wasn't for me. I really didn't know what to do next so I decided to bide my time and get a job in a bar while I thought about which path I should take."

Being in front of an audience had always been Paul's passion since he performed in a dance troupe as a young boy. When he found himself attracting the crowd's attention again juggling bottles and glasses in his new role as a cocktail bartender, he started to seriously consider how he could get back on stage. "At first I began to do a few magic tricks and juggle just to earn a bit more money in tips, but having a new audience prompted me to think about whether I could actually become a full-time professional magician," Paul said.

Knowing he needed to get some work experience under his belt, he found a job at famous magic shop Davenports in the heart of London. Immersed in the magic industry, Paul quickly began developing and performing his own tricks. With a routine that included fire sprouting from his fingertips and turning copper coins to gold, he won the award for originality at The Magic Circle Close-Up Magician of the Year event in 2009 and 2010. 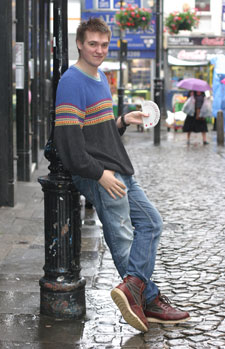 "My routines were going really well and I even helped set up a school for novice magicians but, in the back of mind, I knew I eventually wanted to work for myself," he said. "My time at Davenports had provided me with many opportunities to make contacts and learn about the trade - I met well-known street magician Dynamo and David Blaine among many others - but I was still an employee and I wanted to be a successful businessman in my own right, which is where my degree study came in."

By the summer of 2011 Paul had a series of regular shows set up and realised that if he wanted to study at university, it was now or never. "I researched business courses online to see what I could apply for with my A-level grades, and then got straight on the phone to Kingston University," he said. Paul recommends anyone entering Clearing to research alternatives to the course they have in mind in case the exact one they are interested in is not available. "You don't have a huge amount of time to make a decision once you get on the phone, so make sure you are as informed as possible about the different combinations within your field of study," he said.

As a mature student, Paul says he has brought his nine-to-five attitude with him to university.  "Going out to work before I studied gave me the discipline and focus I needed," he said.  "I didn't have that when I did my A-levels, but now I'm really proud of the high marks I'm achieving on my course."

Paul's degree in business systems management has helped the young illusionist concentrate on his strengths and look at what he needs to learn to become self employed. "I've already covered so many important aspects of business, from accounts to marketing, and I've also discovered a particular flair for computing," he said.

From London's West End to the Old Paris Stock Exchange, Paul enjoys performing in as many different venues as he can.  "Magic prompts an emotional response and that's what I love creating for people," he said. "I'm at home on the stage, but I knew I needed to make a business success of my work, which is why I'm so glad I've given university a second go."