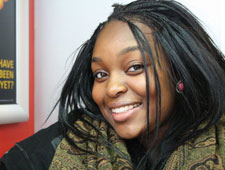 This summer she's won a placement at the world's largest commercial real estate company, CBRE. Just 12 months ago though Dami Omisore wasn't even sure she would be able to study at university. A call to Kingston University's Clearing hotline soon set her mind at rest and, after securing a place on a real estate management course, there's been no looking back for the 20 year old. Now Dami is gearing up to take calls from other anxious students who find themselves in a similar position after signing up to join the staff on Kingston University's Clearing hotline.

Dami entered the Clearing process last year after not quite achieving the grades she hoped for in maths, biology, chemistry and economics at college. "I really enjoyed maths and had been calling Clearing hotlines inquiring about economics and science courses, but it wasn't until I phoned Kingston University that I felt I was speaking to someone who was genuinely interested in me and whether I fitted the course," she recalled. "I originally ruled out the offer of a place to study real estate management though because it hadn't been one of the subjects on my radar." 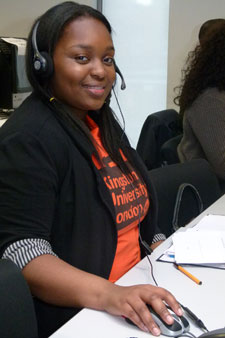 However, after discussing the opportunity with her family, Dami realised the subject might not be as far removed from her interests as she had initially thought. She called the Kingston Clearing hotline again and spoke to one of the admissions tutors to find out more. "As soon as the lecturer started telling me about some of the modules, including property appraisal and valuation, the degree appealed to me straight away. I could see several areas I had an interest in," she said.

Dami admits she was concerned about finding somewhere to live but discovered plenty of advice on the accommodation pages on the Kingston University website. "Originally I hadn't considered commuting from home in Shepherds Bush, but soon realised I'd be saving so much money by staying at home," Dami said. "Being at home hasn't stopped me taking part in any activities or making friends - students just have to be determined and make sure they get involved."

This summer Dami successfully applied for a placement with international real estate company CBRE. "The experience is great for my CV, especially as I'm thinking about starting my own property business once I graduate," she said. "I would never have had the confidence to do something like that if I hadn't come to Kingston University."

Dami is looking forward to helping other students going through the Clearing process this year. "No-one I spoke to on other Clearing hotlines last year was as helpful as the Kingston University operator who made me feel really valued as a potential student," she said. "I really want to be able to do that for someone else."

Her advice to students looking for a university place through Clearing is to be open minded. "When you're calling for one course, don't dismiss others out of hand. Look beyond the titles of the modules and ask yourself if the subjects appeal to you," she said. "The course tutors advised me I was a good fit for my degree and now I know they were right. Even if, like for me, A-level results come as a blow, it's definitely still worth chasing that dream of going to university."