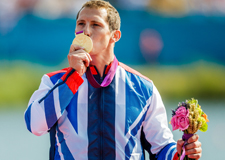 Kingston University graduate Ed McKeever has powered his way to Olympic glory in the men's 200 metre kayak sprint. Ed, who completed an accountancy and finance degree at Kingston in 2008, saw off stiff competition from seven other finalists to clinch the coveted gold medal in just 36.24 seconds.

The 28 year old held the lead from the start, with an ecstatic crowd of 30,000 roaring him to victory at Dorney Lake in Buckinghamshire. After crossing the finish line, he celebrated by hitting the water and punching the air.

He spoke afterwards of his relief at becoming an Olympic champion. "I knew I might struggle because I'm one of the lighter guys and we are more affected by a head wind," Ed said. "I was just focused on the first two or three strokes as I really wanted to nail those to get out cleanly. I hoped the race would then sort itself out and it did. I'm so happy but it's not so much elation, more relief that I did it in front of the home crowd." 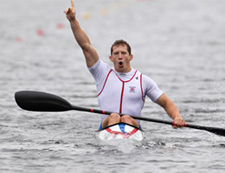 Kingston University's sports development officer Jo Heath said she felt a real sense of pride watching Ed race to Olympic triumph. "It was very emotional seeing a former Kingston University student winning gold. I think when you see all the hard work leading up to this point in a sportsperson's career you can really appreciate the sense of achievement when they are on the medal podium,"  she said. "Ed was on our sports performance programme when he studied at Kingston University and knowing that we have helped him on his gold medal journey is a great feeling. We are all very proud of him."

Kingston University's sports department had helped Ed find a balance between study and training, Mrs Heath added. "His success will help raise the profile of our sports performance programme for future athletes looking to study with us," she said. "Hopefully this will prompt additional funding which we can use to support even more talented Kingston University students whose Olympic dreams are pinned on Rio in four years time."