Volunteering leads to a life of crime fighting 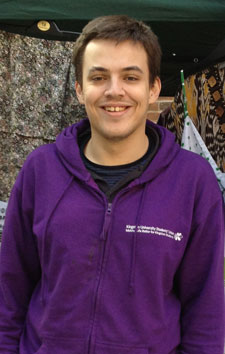 Criminology student Will Scott-Barrett is embarking on a new role with the Metropolitan Police this autumn, and he hasn't even finished his degree studies yet.  The 23 year old will be packing in a full-time role as a designation detention officer while he completes his studies part-time - and it all started when he became a Students' Union volunteer.

Will tried his hand at a few short-term volunteering roles, including walking retired greyhounds at Hersham Hounds and being a marshall for a charity marathon, but wanted to find something more regular. That was when he spotted an opportunity to work for the Metropolitan Police. "I was keen to get involved in any sort of volunteering when I first joined the University and had picked up information from the Freshers' Fayre. I wanted to try my hand at lots of different things to build up my confidence and people skills," Will, from Salisbury in Wiltshire, said. "Since I was studying criminology, I thought it would be a good idea to follow up on the chance to become a civilian volunteer and was placed at Kingston police station. The hours were really flexible and I managed to get in one or two sessions each week."

Will's role saw him staffing the counter at the police station. In the two years he was there he encountered situations that he credits with giving him excellent experience working with a variety of people. "From general enquiries through to angry or distressed people, every day there would be something different to deal with," he said. And, while he was there, other opportunities arose. "I started to do a bit of volunteering for the Metropolitan Police's Specialist Firearms Command - we would do role playing as hostages for them while they were training their officers," he said.

Will was even involved in a scenario planning exercise in central London to help the emergency services practise dealing with the response required should the capital be struck by another terrorist attack. "I was a casualty on the day and the experience gave me the chance to see things from both sides, as a victim as well as a policeman," he said.

The more Will found out about the work of the police, the more he started considering his career options. "I began to think seriously about a career in the Force and trained up to become a special constable," he explained.

Although not paid for his stints as a volunteer police officer, Will found balancing work and study the real skill. "My basic expenses were covered, so I wasn't as worried about how much the volunteering would cost me - but I had to be quite careful to plan the time it took around my studies," he explained. "You don't know how much you can achieve sometimes until you push yourself. I've discovered that I'm able to fit in a huge amount that's not only giving me extra life skills, but has got me a job too."

Combining criminology and his special constable role has helped Will learn about law, the psychology of crime, politics and economics while also experiencing real-life policing. "Although I'll still need to finish my course part-time this year, I now have a job lined up that I simply wouldn't have been able to apply for unless I'd taken part in volunteering," Will explained.

Between times, Will has even managed to find time for go-karting and to run the Student Union's Wine Society. "I've made most of my closest friends through the extra curricula activities I've done while studying at Kingston University," he said. "Like many people, I didn't know what I wanted to do for a career when I started my degree. The experiences I've had and the people I've met along the way though have really helped shape my decisions and I'm looking forward to my job on the beat with the police."