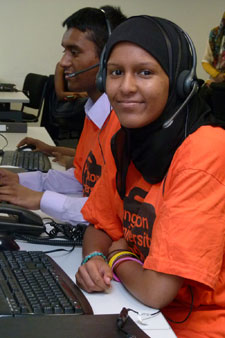 When sports-mad Rahimah Chattun discovered she was just shy of scoring enough points to study physiotherapy, she thought her university dreams were over. "I was really upset my course work had let me down and I was just four points off getting the grades I needed," she said. "I was so disappointed."

The young fitness fanatic was not one to give up easily however. The 20 year old from Hounslow, who has been working as an operator on Kingston University's Clearing hotline this year, turned to the website run by universities admissions service UCAS for advice about entering the Clearing system to find an alternative course.

Set on pursuing her interest in the human body, she called Kingston University's Clearing hotline and was transferred to the life sciences department. "I was so worried I wouldn't be able to go to university but the Kingston staff really understood and helped set my mind at rest," Rahimah said. "I was interviewed over the phone by an admissions tutor and, after checking my grades, they told me right away I had a place to study medical biochemistry. I was massively relieved."

In her second year, Rahimah transferred to the university's human biology course to tailor her studies even more closely with her interest in sport and fitness.  As well as the course, the other attraction Kingston University held for Rahimah was its sports facilities. She joined the University's basketball team in her second year and plans to try out for its rugby team next term. "Becoming part of the basketball team has been great. I've met so many friends," she said. 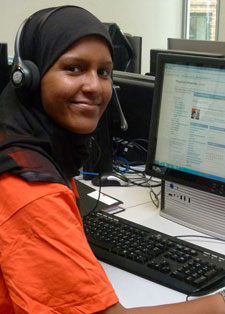 This year Rahimah signed up to be an operator on Kingston University's Clearing hotline to help students in a similar position to the one she was in two years ago. "When I found out I couldn't get into the university of my choice I was devastated, but it wasn't long before I realised how many great courses were still available through Clearing," she said. "Now I want to do my bit to help other people make the most of the opportunities that are out there."

As well as her sporting endeavours, Rahimah has also thrown herself into other aspects of university life. Last year she became a student ambassador and has just received an award for her achievements as an inspiring role model. "I really enjoy working with young people in schools and colleges - it's great to be able to share my experiences of university life with them and encourage them to think about higher education themselves," she said. "I love getting involved with what the university has to offer outside my studies."

Rahimah's volunteering efforts have not just been confined to the University either. For someone as keen on sport as she is, having the Olympics and Paralympics in her back yard has been a real treat. Although she didn't have enough money to apply for tickets, she has landed a role volunteering as a Games Maker instead and will be in the thick of all the action at the Paralympics. "I'm going to be based in the athletes' village, making sure the competitors get on the buses to go to their events," she said. "I can't wait - it's the opportunity of a lifetime."

She is also looking forward to getting back to the books again, safe in the knowledge that she is now well on her way to achieving her dream of studying for a PhD in sports physiology. "I'm so glad I got the opportunity to go to university," she enthused. "I love it and can't imagine doing anything else."