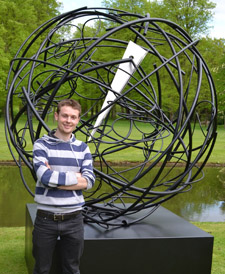 Kingston University fine art students are taking over a London warehouse art gallery between September 4 and 7 to showcase their latest projects. Shortly before it formally reopens after its summer break, the Hannah Barry Gallery in south east London will play host to work by students completing Kingston's Master in Fine Art courses.

The exhibition is entitled Will Happiness Find Me? - a name taken from the title of a book by Swiss artists Peter Fischli and David Weiss. The book consists of questions ranging from "Can I restore my innocence?" and "Does unease grow by itself?" to "Is the freedom of birds overrated?" and "Does a hidden tunnel lead directly to the kitchen?". The students hope their art will prove similarly surprising and thought provoking.

The exhibition includes work by up-and-coming sculptor Mark Beattie, who mounted his first solo exhibition this year. Mark's Global Odyssey series was inspired by a year studying at the Australian National University in Canberra before embarking on his postgraduate studies.

"Canberra opened my eyes to the possibilities of working with metal," he explained. "But Global Odyssey is also influenced by being far from home and separated from friends and family." The resulting sculptures are globes made up of twisted and tangled bars, conveying a sense of dislocation and distance.

On his way home, Mark, 25 and from Nottingham, spent time in Indonesia, further stimulating his interest in travel and foreign cultures. He then decided to study for an MA in European Art Practice. "I chose Kingston University quite quickly because it was the only place that had facilities to match what I'd been working with in Australia," he said. "It's been like a playground for me. I was like a child in a sweetshop - there were so many unexpected resources to work with."

As well as staging his first solo show at the Visual Arts Centre in Lincolnshire, Mark has also already been selected to contribute to Sculpture Al Fresco, a group exhibition at the Great Fosters Hotel in Egham in Surrey, which also includes work by the likes of Steven Gregory and Howard Hodgkin.

Other Kingston University's fine artists' projects include installations, photography, video work and painting. Lucy Lauener's installation Temple Lodge What? tells the story of the west London home of Sir Frank Brangwyn - an early 20th Century artist. He had the distinction of allegedly having a price put on his head by Kaiser Wilhelm II, who was shocked by one of Sir Frank's war posters showing a British soldier bayoneting a German.

"My installation consists of two films, perspex sculptures, library books, black and white photography and a short story," Lucy said. "Temple Lodge is now a guest house and a Steiner church. I hope my work conveys the special atmosphere of this unique place."

Mark and Lucy are among 34 fine artists from Kingston University exhibiting at the gallery. The students are mainly drawn from three MA courses - art and space, fine art with learning and teaching in higher education and European art practice.