Students brave the deep for Thames river clean up 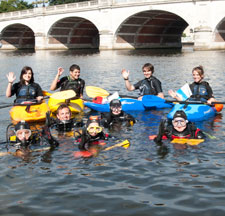 A group of Kingston University students who volunteered to clean up a stretch of the River Thames had no idea just what was in store for them when they braved the deep.

The 26 volunteers gave up a total of 177 hours of their time to fill two skips full of rubbish, coming across a number of surprising finds in the process. The haul included items as random as traffic cones, a garden gnome, car tyres, metal scaffolding, sandwich board signs and two china cups.

The one-day event was the brainchild of second year student and fully-fledged scuba diver Chris Elliott, 33, a member of the Kingston University Students' Union Sub-Aqua Club. He wanted to give fellow members - all of them non-divers before they came to Kingston - a challenge to remember.

"It took a year to organise but, through sheer determination and hard graft on the part of the Kingston University Students' Union volunteering team and everyone else involved, we had a tremendously fulfilling day. We managed to clear two stretches of the Thames by Kingston Bridge and helped showcase the very best of what student volunteering is all about," he said. 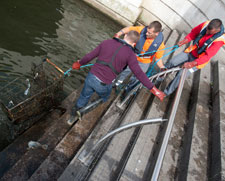 The event had demonstrated teamwork at its best, Chris added. While the divers plunged into the murky depths and dragged out rubbish which posed a threat to marine and other wildlife, members of the Students' Union kayaking club kept other river users at a safe distance. As the debris was hauled to the surface, more volunteers dragged it to the two waiting skips which were provided free of charge.

"We pulled the most amazing mix of rubbish from the riverbed," Chris, who is completing a degree in cyber security and computer forensics with business, said. "A vacuum cleaner, nine chairs, a bird bath, one shoe, three bikes, three roadwork barriers and two metal fences were amongst the haul. The things people throw into the water are just bizarre."

Chris hopes to stage another river clean up next April.