Seven contemporary artists, including a Turner Prize nominee, have joined forces to celebrate the re-opening of Kingston University's new look Stanley Picker Gallery. They have launched a rather homely art exhibition called The Occupants to mark the 30th anniversary of the death of cosmetics magnate and arts patron Stanley Picker.

The refurbished gallery boasts a brighter, larger entrance leading into a new open plan lobby. Bespoke furniture created by two of the Faculty of Art, Design and Architecture's lecturers, Jochem Faudet and Jon Harrison, offers a place for visitors to meet and relax. Meanwhile, an area overlooking the Hogsmill River has been turned into a small terrace complete with a sustainably-sourced cork wall designed and constructed by Kingston University postgraduate architecture students and tutor Andrew Budd.

The relaunch coincides with the gallery's 15th birthday and director David Falkner said it would ensure the gallery was an even more attractive venue for arts enthusiasts across the borough and other parts of London. "We hope the redevelopment will really encourage visitors to make the most of the variety of exhibitions and events we stage," Mr Falkner said. "The gallery is a key part of the Stanley Picker Trust's legacy and we are keen to celebrate his patronage of arts education by making even more of this invaluable asset at Kingston University."

The new exhibition features film, photography and installations inspired by Stanley Picker and his house on Kingston Hill, which was designed by architect Kenneth Wood. Brimming with his personal art collection, the house - built in the late 1960s - has remained unchanged since his death in 1982. The property is maintained by the Stanley Picker Trust which helped the University set up the gallery in 1997 and contributed towards the cost of the refurbishments.

The exhibits include a bunch of brightly coloured zigzag-shaped helium balloons designed by artist Andy Holden. They are Holden's homage to Stanley Picker's days as a company director when the success of the family's cosmetics company - behind such famous names as Mary Quant and Miners - funded his passion for the art works that filled his home.

Mr Holden took his inspiration from the colourful smears and squiggles of nail varnish and lipstick used in make-up advertisements. "Stanley Picker brought cosmetics to the high street at an important time in British culture. Make-up as a form of expression was a huge influence on the Pop Art movement," Mr Holden, who early next year will be working on his own exhibition as part of his fellowship at the gallery, said. "Like make-up, artwork can be decorative so, with the gallery having a facelift itself, I liked the idea of creating something colourful and bold." 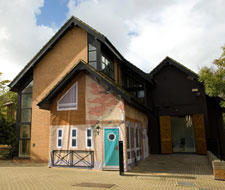 Meanwhile, the new entrance to the gallery has been wrapped with a house-like hoarding designed especially for the exhibition by another Stanley Picker fellow, Matthew Darbyshire. He has been joined by artist Elizabeth Price, nominated for this year's Turner Prize, who is showing her film 'At the House of Mr X'. Shot at dusk, it was the first ever moving-image footage to be made inside the Picker House.

Nearby, photographer Bridget Smith's images of the house provide the backdrop for the main exhibition space, while Charlotte Cullinan and Jeanine Richards, who run the University's MA in Fine Art, are turning visitors' heads skywards with their lighting installation. And curator Tom Morton has worked with Matthew Darbyshire to recreate a corner of the Picker House kitchen for the exhibition, even including the cooker. They were intrigued by the way stray objects from the house's modern day custodians appear amongst Picker's original furniture and artworks.

"The blessing for us is that all of the great artists featured in The Occupants are directly involved in other capacities across the University," Mr Falkner said. "The gallery, which originally opened at the Knights Park campus in 1997, is an active workshop too. Students and visitors can witness the creation of art as well as appreciate the finished works for free. With our range of special events, community days and exhibitions, there are plenty of chances for everyone to get involved."

Professor Steven Spier, Dean of Kingston University's Faculty of Art, Design and Architecture, said few academic institutions could boast a gallery that was so professionally run and which offered such a high-quality programme. "The addition of the Stanley Picker Gallery to Arts Council England's national portfolio at a time when the arts are facing significant funding cuts confirms that the gallery plays a pivotal role in the artistic community," he added. 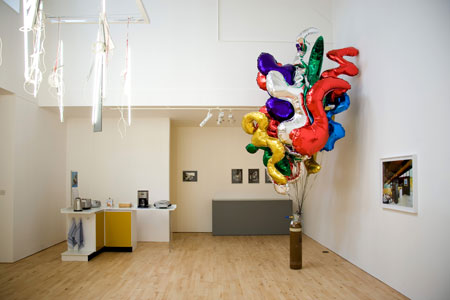