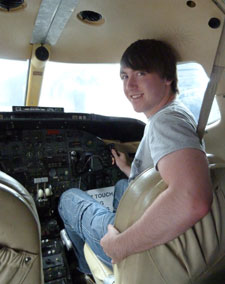 A Kingston University student's dreams of working in the aviation industry have moved a step closer thanks to a brand new scholarship. Dominic Marley, who is originally from Gateshead, was awarded £4,000 for showing outstanding ability, ambition and potential while completing a Foundation Degree in Aircraft Engineering at the Newcastle Aviation Academy. The money will help him top up his studies to a Bachelor's degree at Kingston University and realise his goal of working with aircraft.

The 20 year old has been passionate about the world of aviation for as long as he can remember. "Pretty much every aspect of aircraft engineering fascinates me - from the design and technology right through to the safety features," he said. "Even before I'd finished school I'd decided that I wanted to pursue a career in the field. A friend once said to me "I wish I had your enthusiasm for aeroplanes" which I think really sums up how I feel, so to win this scholarship was incredibly exciting."

Dominic first found out about the Kingston course when he embarked on the two-year Foundation Degree it runs in partnership with the Newcastle Aviation Academy. "To fast track my career I was really keen to move on to Kingston University for a further year and top up to a Bachelor's Degree," he said. "One of my lecturers in Newcastle told me about the scholarship, so I applied and was lucky enough to get an interview. I couldn't believe it when I found out I'd actually been awarded the money. Words can't describe it - I just sat staring at the letter for ages trying to take it all in." 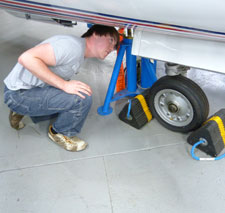 The scholarship was set up in memory of Sir Sydney Camm who, during a lengthy career as chief designer at Kingston's HG Hawker Engineering Works, developed more than 50 types of aircraft. His achievements included the Hawker Hart bi-plane, the Hurricane fighter plane and a prototype for the VTOL Harrier. The Hurricane is credited with shooting down more enemy aircraft in the 1940 Battle of Britain than all other RAF fighters and ground defences put together.

Funded by The Worshipful Company of Coachmakers and Coach Harness Makers, the award will each year give a particularly promising student a financial boost to help them gain the qualifications needed for a career in aircraft engineering. "We strive to help young student engineers fully realise their potential and are delighted that we have been able to recognise the qualities shown by Dominic in his studies so far," Group Captain Marcus Wills, Past Master and Trustee of The Worshipful Company of Coachmakers, said.

Once he has completed his Kingston University degree, Dominic hopes to work as an aircraft mechanic. "Topping up to a Bachelor's degree deepens and broadens students' understanding of aircraft maintenance engineering and the aviation industry," Dr Peter Barrington, the Head of Kingston University's School of Aerospace and Aircraft Engineering, said. "Our extensive range of equipment, which even includes a Learjet and flight simulators, provides a real-life environment that significantly enhances students' learning. This scholarship will really enable Dominic to make the most of his studies and get all the experience employers are looking for."

Dominic is now settling in to student life at the Roehampton Vale campus. "The facilities are outstanding," he said. "I really can't believe I'm going to be lucky enough to work on such amazing equipment and can't wait to get stuck in to my studies." 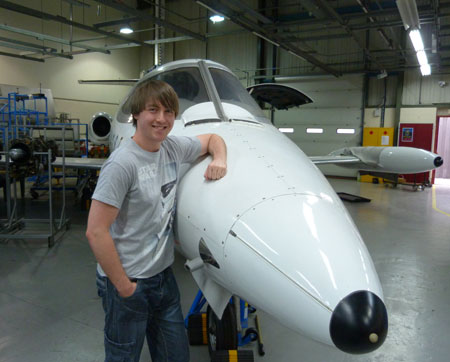