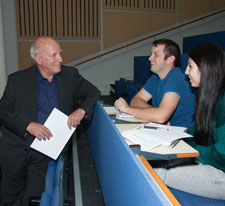 The BBC's response over the dropping of a Newsnight investigation on the Jimmy Savile sex abuse scandal was not enough, former BBC Director General Greg Dyke has said in a lecture at Kingston Business School.

Asked about the corporation's decision to drop its own film on the Jimmy Savile sex abuse allegations, Mr Dyke said: "When, after day one or day two, the BBC said 'We didn't run it for editorial reasons', I don't think that was enough. When they had seen what had happened to this story and how it was going to run, I think they should have moved very quickly to explain what the editorial reasons were.

"Someone had to explain why they took a decision not to do it  because otherwise it left them looking suspicious and it looked like they'd been leaned on because the BBC wanted to run two specials about Jimmy Savile, which I don't believe would have happened," he added.

Mr Dyke was addressing an audience of external guests, staff, students and alumni after being invited to Kingston Business School to speak as part of its Strategy into Practice seminar series.

Mr Dyke said he had turned down a recent invitation to appear on Newsnight, saying he had told BBC journalists to ask the programme's editor to go on instead. "I got phoned by Newsnight last Thursday and was asked to go on when they were going to do the story for the first time and I said 'No, why don't you ask your editor to come on?'. And of course, nobody came on from the BBC and that was a big mistake. Someone should have gone on and said 'These are the editorial reasons'. Either the lawyers said it didn't stand up, which happens all the time, or that we thought the damage it would do to this man's reputation, given the one case we had, wasn't worth it, or something like that." 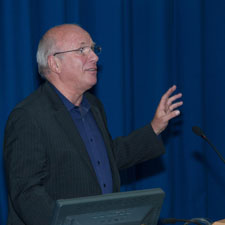 Mr Dyke added that he thought the culture in broadcasting had changed radically since the 1970s and 1980s, but warned against the cult of celebrity. He said he had been speaking to a television journalist this week who told him about a time when she went for a job at a major Australian broadcaster only to end up with the man interviewing her feeling her breasts. "That is inconceivable today in this country - the man would be sacked," he said. "So it's a different culture. However, there is always a danger about celebrities and stars and the relationship between them and the rest of the production team because they're all-powerful."

Mr Dyke, who ran the BBC after the period on which the allegations centre, told the audience he doubted the scandal would cause lasting damage to the BBC. "Would I have done it differently? Well, you never know. Is this long-term damaging to the BBC? I doubt it. All stories go away in the end. Suddenly, in the next week, Jimmy Savile will become a boring story."

Third year Kingston journalism degree student, Matthew Wilson, said he had found the former BBC Director General's down to earth approach refreshing. "Greg Dyke was engaging and funny," he added. "He had a good range of anecdotes that were easy to identify with and I think he was great choice to give the first lecture of this series."