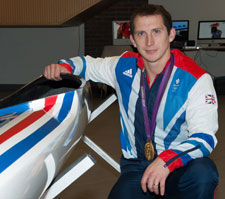 Kingston University graduate and Olympic gold medallist Ed McKeever revealed that he is already gearing up for the challenge of defending his title in Rio 2016 when he returned to campus last week for a reception with students, staff and alumni.

Ed powered his way to Olympic glory in the men's 200 metre kayak sprint this summer, having graduated from Kingston in Accountancy and Finance in 2008.  He saw off stiff competition from seven other finalists to clinch the coveted gold medal in just 36.24 seconds, but told people in the packed lecture theatre that he's certainly not resting on his laurels. "In Rio my competitors will be stepping up so I have to be prepared to paddle even faster to defend my title," he said.

Describing the moment when the gold medal had been placed round his neck after his win on home turf at Dorney Lake in Buckinghamshire, the athlete added: "Standing on the podium in front of 20,000 people singing along to the national anthem is probably the only time in my life when I'll feel like a rock star." 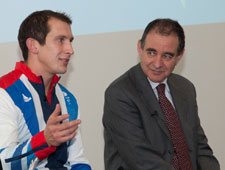 The 28-year-old brought his world-beating kayak with him to show off to students. He was met by a large crowd eager to hear about his London 2012 experiences and was happy to chat, pose for photos with his gold medal and sign autographs.

Postgraduate student Maggie Walsh, 23, from Pennsylvania, who is studying English Language Teaching, said she had been inspired by Ed's talk. "He seems so down-to-earth and very driven," she said. "He's a great role model for anyone who wants to develop themselves as an athlete or take up another activity whilst also achieving their academic potential."

Ed's talk was delivered in the surroundings of the University's brand new business school building, which he said he found very impressive. "It's great to see all the amazing new facilities at Kingston," he said.  "It feels more than ever that the whole university is completely geared towards the needs of its students." 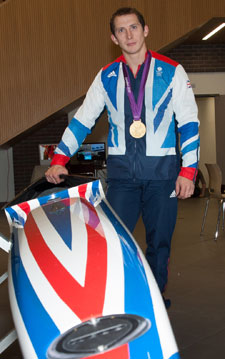 He also reminisced about his degree studies, the challenges of juggling coursework with training and the important part the University had played in his success: "I was able to take six years to get my degree and Kingston were incredibly flexible on how I managed my academic schedule which made an enormous difference to me," he said. "I'd say in terms of sport and exams it's all quite a similar process. You go through the preparation, be it studying or training, and that builds confidence going into an event."

Winning Olympic gold had completely changed his life, both personally and as an athlete, Ed explained. "Just being able to say 'Ed McKeever, Olympic Gold Medallist', opens many doors," he added. "It's also fantastic to meet people and see their smiles as they catch sight of the medal."