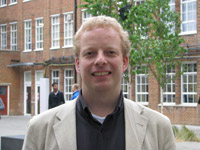 This year's Labour Party conference is likely to be dominated by press and bar room speculations about Brown's future as party leader, according to Dr Robin Pettitt, an expert on the internal politics of the Labour Party from Kingston University. Speaking ahead of the conference, which kicks-off on Sunday 27 September and runs until Thursday 1 October, Dr Pettitt said discussions would centre on the future direction of the Labour Party, especially surrounding the lessons to be learnt from the financial crisis. There would also be lots of potential for symbolic, but also embarrassing defeats for the leadership in conference votes, he said.

"Behind the carefully choreographed show on the main conference stage the talk at the fringe meetings and in the bars will be dominated by two key issues: Brown's future as leader and where the Labour Party should be going in the last months before the next general election," Dr Pettitt said. However, he admits Brown's future is unlikely to be in real doubt. "It is virtually impossible to oust a Labour leader who does not want to leave, especially when there is no obvious challenger. This will not prevent some from plotting, or perhaps rather dreaming up, convoluted and rather far-fetched plans of how to replace Brown with a more 'electable' leader. But the plotting is likely to amount to little more than press headlines and behind the scenes gossip in hotel bars."

This does not mean that the issue of Brown's leadership is not relevant at this year's conference, though. In 2007 Brown pushed through several changes to the party's policy-making process on the understanding that they would be reviewed after two years - that is this year, Dr Pettitt said. "There seems to be a growing feeling among many local parties and more importantly among the powerful trade unions that the reforms should be reversed," he said. "Brown's authority would be further damaged if his reforms were to be so publicly reversed by the party."

While the debate over Brown's leadership and the fate of his reforms may occupy part of the conference, the question of Labour's path up to the next general election is likely to be at the centre of most debates. "Behind this unified desire to defeat the Conservative Party there are serious differences of opinion about how to do this," he said. "The leadership is likely to stick to the line that while any government will have to take a long hard look at public spending, cuts by a Labour Government will somehow be 'kinder' than those made by a Conservative Government."

Dr Pettitt believes that these debates are likely to be lead by two Labour think tanks currently fighting over the soul of the party - Progress, associated with the party leadership and the right wing of the party, and Compass, associated with the moderate left of the party. "Perhaps the most important outcome of the conference will be whether it is Progress and the party's right wing, or Compass and the party's moderate left which will be the most successful in conference debates and press coverage," Dr Pettitt said. "This will give an important indicator of which of these two strands of the party will lead it into and what is likely to be a difficult post-election era."