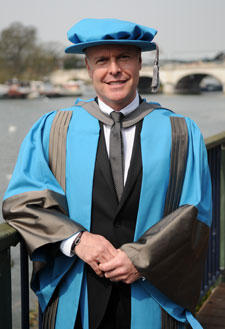 The creative director and executive vice president of design for global fashion brand Banana Republic has been named an Honorary Doctor of Arts by his alma mater, London's Kingston University. Speaking following the ceremony at Kingston's Rose Theatre on 8 April, Simon Kneen credited the professional skills he developed while studying fashion at Kingston for being pivotal in helping shape his career.

Mr Kneen first made his mark in the industry specialising in womenswear and childrenswear in Italy, before setting up his own studio and label and serving as a design consultant for top Italian brands. He has been at the forefront of Banana Republic's global design team since 2008 after holding senior posts at the Retail Brand Alliance in the United States, where his numerous achievements included being the first person to design a collection for both men and women at Brooks Brothers. Mr Kneen's extensive curriculum vitae also includes two years as creative director for Italian label Maska, known for its exclusive couture and fashionable ready-to-wear ranges, and a period as a head designer for Maison Balmain.

His passion for the industry dates back to his time at Kingston University's predecessor Kingston Polytechnic, where he studied under renowned fashion educator Professor Daphne Brooker. He looks back on his years at Kingston as some of the happiest in his life. "Learning from Daphne Brooker was extraordinary - there was always an electricity in the air," he said. "The fashion course at Kingston was just as rigorous then as it is today. We worked extremely hard, it was always challenging and it really stretched us. I don't think I've ever been as tested."

One of the highlights of his student days came during the summer of 1980 when Professor Brooker sent a young Mr Kneen to work with Lady Clare Rendlesham at her Yves Saint Laurent boutique in London's Bond Street. "Lady Clare had a formidable reputation as a fashion editor in the 1960s, but she really encouraged me," he recalled. "It was the best summer ever. She even wrote a letter to me afterwards and my parents have kept it to this day. She was an extraordinary woman and very inspiring." 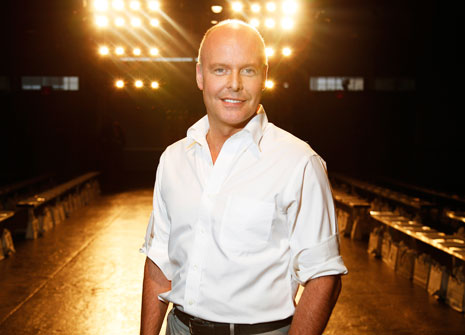 Mr Kneen accepted his honorary degree in front of hundreds of students graduating with art, design and architecture qualifications. Graduates stepping in to the fashion industry today were entering a different world to the one into which he emerged in the 1980s, Mr Kneen said. "Fashion was very much an art form when I graduated and, if you were lucky, you could turn it in to a business," he said. "Today, being involved in the industry is not just about the creative thought process - it's about understanding what's good and bad for business and that's where my Kingston training has been crucial." He described working through the current economic downturn in particular as a ‘rollercoaster of an experience', but one for which his time at Kingston had prepared him well.

Kingston University's academic director of fashion Elinor Renfrew said Mr Kneen had displayed an unstinting commitment to fashion education throughout the course of his 30-year career. "Simon has retained close links to Kingston University since he graduated and is an exceptionally inspiring role model to our students," Mrs Renfrew added. "His sharp eye for detail, astute knowledge of the global market and determination to approach design from a fresh perspective make him a truly motivational mentor during his visits to Kingston's fashion studios. We are enormously proud to be able to mark his exceptional success and contribution to the fashion industry by naming him an Honorary Doctor of Arts."