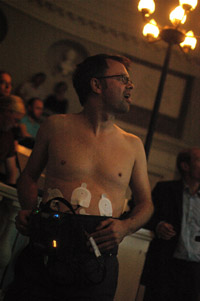 In scenes reminiscent of the 1960s movie Fantastic Voyage, Kingston University's director of Film-making, artist Phillip Warnell, swallowed an untethered pill camera and the images of its journey through his insides were broadcast live, with commentary by gastroenterologist Simon Anderson of St Thomas Hospital, London.

The performance, Endo - Ecto, at the Medical Museion, University of Copenhagen, lasted about 90 minutes and was watched by a packed house of artists, historians and doctors. "It was a pretty intense, intimate experience, as you can imagine," Phillip said. "I was exhausted afterwards, as I'd had to fast for 24 hours, but exhilarated too and delighted with how it went." The audience were invited to ask questions during the performance, which ranged from topics such as medicine to politics. "The Museion was an amazing space to perform in, as it dates from 1760 and many medical procedures and dissections have been carried out in it, so there was a real sense of continuity of culture," Phillip added.

Like much of Phillip's work, the performance explored the secrets of inner space, transparency and the unseen. Several film clips were screened during it, including James Williamson's pioneering short film The Big Swallow (1901, courtesy of the British Film Institute, London) which first simulated the swallowing of a camera.

His next project will look at the plague. "Like swine flu, it's the unseen enemy which terrifies people," Phillip said. "I'm fascinated by things invisible to us that permeate our bodies."