Research by Kingston emeritus history professor Peter Beck has been included in a new report showing the impact of universities' research and sport development on the Olympic and Paralympic Games, and on UK sport generally. The report has been released as part of Universities Week, which aims to increase public awareness of the wide role played by the UK's universities. 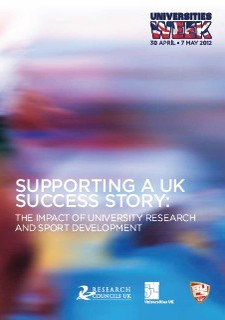 Peter has researched Britain's historical relationship with the Olympic movement, in particular issues arising from hosting the games. This year will be the third time Britain has acted as host; on both previous occasions the country faced major challenges. In 1908 London stepped in to host at the last minute and, in 1948, London took on the task of getting the Olympic movement back on track after the controversial 1936 Berlin Olympiad and the lengthy gap caused by the suspension of the Olympics during WWII. Using his historical perspective, Beck says London 2012 should be interpreted as helping to rebuild and strengthen Olympism following the bribery crisis of the late 1990s.

Peter's research is highlighted in the Universities Week report, Supporting a UK success story: The impact of university research and sport development, which highlights just some of the ways in which research has helped Team GB prepare for London 2012.

The report takes an in-depth look at how exploration and development in the areas of technology, health and wellbeing, design, sport development and participation and the Games past and present, have contributed to London 2012 and the UK sports industry.