From doping allegations to disputes over false starts, nationality issues and qualifying criteria, barrister Graeme Mew has heard it all. His expertise in sports arbitration is sought worldwide and this summer he was chosen as one of 12 legal experts on the athletes' court of appeal. 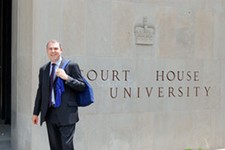 Mew's razor-sharp legal brain and his passion for sport made him the ideal sports arbitrator. He has already served on international sports arbitration panels around the world and when he was asked to join the ad hoc panel of the Court of Arbitration for Sport (CAS) at the London Olympics, he embraced the honour enthusiastically - despite there being no fee for his work.

Graeme and 11 other international arbitrators were on duty from Monday 16 July (10 days before the Games start) until the morning after the closing ceremony in mid August.

Graeme originally intended reading history at university but his father encouraged him to consider law and he accepted an offer from Kingston Law School. During his degree, he took a year's sabbatical to serve as president of the Students' Union, and gained his first experience as an advocate. "We had a memorable stand-off with Kingston University's Board of Governors. They decided to jack up the hall of residence fees halfway through the year so we organised a rent strike. To stop people spending it down the pub, we set up a trust account to collect it. There were tens of thousands of pounds in there."

When the Royal Borough of Kingston issued eviction notices to students, Graeme went to Kingston County Court to represent them. "We found a technical error in the eviction notice and the case was thrown out. They rolled back the rent increase for that year and we paid the original rent due. It gave me a taste for what advocacy can do. There's no doubt that Kingston gave me the confidence to think for myself."

When we spoke with Graeme, he was looking forward to the Olympics. "It's a bit like being a fire-fighter. You sit around waiting for the bell to go off, and when it does, it's all hands to the pump. It's an intense 24 hours from the time you find out there is a dispute to the time you release a fully-reasoned decision and, unlike most other arbitration which is private, these decisions are very public, so they have to stand being pulled apart. But above all the London Olympics will be an amazing experience for all involved and I'm honoured to play a part in that."