A brand new Kingston University electric motorbike has finished in fourth place in the 2013 Isle of Man TT zero emissions race. The Kingston team completed the 300-mile course in 25 minutes 41 seconds, with an average speed of almost 89 miles per hour. Kingston fared better on the circuit than any other university team in the United Kingdom, out-performing racing rivals from Brunel and Imperial College London.

Kingston's motorbike, named Phoenix, was ridden by George Spence and built by a team of students, staff and alumni in the new £1 million automotive laboratory at the Roehampton Vale campus. The project was led by principal lecturer Paul Brandon, from the University's Faculty of Science, Engineering and Computing, assisted by four students. Two graduates from last year's race team, who were instrumental in some of the key chassis design and control systems on a previous model, were also heavily involved.

"The bikes we develop really are cutting edge and we demonstrate this by being able to compete at the Isle of Man TT - the biggest stage there is for bike racing - taking on entrants from all over the world with far bigger budgets and far more resources than we have," Mr Brandon said. 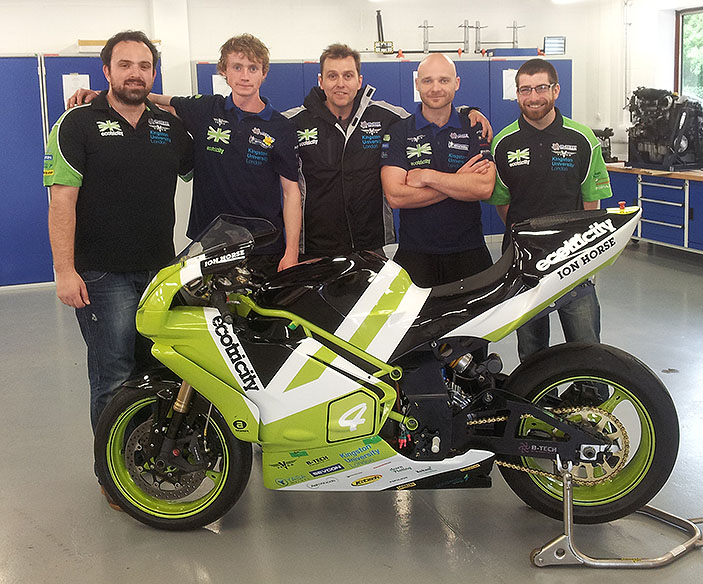 Team member Max Burras, who is in the second year of his automotive engineering studies, said he had learned a huge amount from his part in the project and attending this year's Isle of Man challenge. "It was incredible to find ourselves at the TT and to actually be in the pits with the major racing teams, surrounded by all the big name riders," he enthused.

"Electric power isn't perfect yet, but it's getting better and better. With enough research and investment, it will just take that one break, that one discovery to change the way we power our vehicles," Max added. "The speeds are increasing year on year, so the Kingston team is definitely on the right track."

Meanwhile, Mr Brandon predicts big things for Phoenix's future. "There's certainly more to come from the Kingston University bike. I hope that next year we'll be back at the TT to break the magic 100 mile an hour average," he said.

Previous incarnations of the bike have been successful at other races - two years ago Kingston took third place in the zero emissions category at the Isle of Man TT and in 2010 the team clinched second place at Brands Hatch in the TTXGP race.