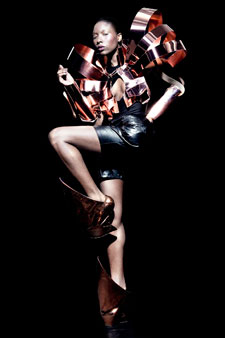 A Kingston University fashion designer has been highly commended for her metallic-themed womenswear collection which includes a glimmering dress made of 2,000 copper plumbing brackets.

The shimmering dress was one of six looks created by 22 year old Sadie Clayton from Mirfield in West Yorkshire. Her voluminous metal sculptures, intricately detailed dresses and towering faux fur wing-shaped coat caught the attention of judges at Graduate Fashion Week and saw her named runner-up in the London showcase's award for innovation. 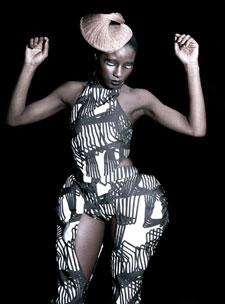 Sadie, who works at Rellik Vintage in Portobello Road and is the creative fashion producer for The Mark Magazine, said the judges' praise for her portfolio and presentation was still ringing in her ears. "It's just amazing to be recognised for your work and I am so pleased to have been one of the very few designers shortlisted amongst all of the professional work I saw at the Graduate Fashion Week's shows and exhibits," she said.

Sadie's sculptured metal creations feature three looks handcrafted from sheets of mirrored copper. The curved design she opted for meant all the edges had to be sanded and smoothed to avoid the material scratching the model wearing it. "I worked for two nights straight to get all the pieces perfected for these looks which included two sculptures and a cape," she said. 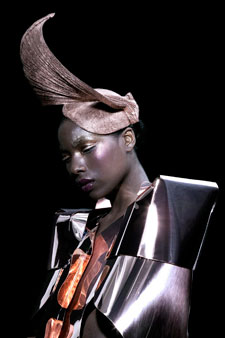 The Grace Jones-style silhouettes were topped with five sweeping avante-garde head pieces developed in collaboration with London-based milliner Niamh Flanagan. "I showed her my research and sketches and was so excited when she said she felt that, with her contemporary take on vintage style, we could work together to create something to match my unusual choice of materials."

The monochrome print and cut out shapes were prompted by Sadie's research exploring the shapes of furniture. "I manipulated the image of a chair and developed it in to a print which I transferred on to thin canvas," she explained. "The cut outs in the underwear, trousers and jumpsuit were all an interpretation of a piece of furniture from the 1970s, while the faux fur wings idea came from a table I saw at the V and A Museum in London." The inspiration for Sadie's sculptures stems from the shapes of lovers' bodies in Japanese art. "I added tabs and slits to the pieces so that when I pinned them all together they would intertwine like limbs and allow me to sculpt the look I wanted," she said.

A self-confessed fan of the 1980s, Sadie stepped out at Graduate Fashion Week in a vintage green metallic suit from the era famed for its fashion statements. "Working in a vintage shop, I get to immerse myself in all the decades of fashion gone by that have influenced collections today," she said. "From shoulder pads to platforms, I just love playing with shape and scale in my own style too."