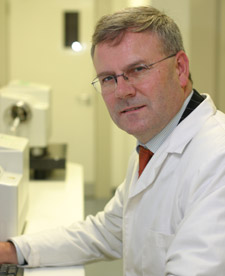 Countries producing food containing harmful bacteria and toxins could be named and shamed more quickly using a worldwide alert system devised by a team of scientists from Kingston University in South West London. The team, led by Professor Declan Naughton, says the easy to use computer tool can be used to monitor contaminated products; helping to prevent them reaching shop shelves and ensuring that food is safe to eat.

Thousands of alerts about contaminated food are produced each year, particularly by developed countries, but there is no single international system for monitoring food safety. This prompted Professor Naughton and his colleagues, from the School of Life Sciences, to develop a program to analyse alerts and produce a global picture of the countries that trade and detect contaminated food that can be deadly or cause health problems from food poisoning to long term degenerative diseases. Professor Naughton recently presented a summary of the team's findings to a conference organised by the European Food Security Authority, the EU's food safety and security watchdog.

Professor Naughton said the program was the most sophisticated available, providing more detailed information more quickly than its rivals. "No other system can reflect the complexity of this information in a snapshot form," he said."It can be particularly helpful to developing countries new to food testing because information is easy to access and available in minutes." The program could also be applied to other global health hazards such as pest control or illegal animal or plant imports.

China, Iran, Turkey, the United States and Spain were the top five offenders when it came to producing contaminated food, according to an analysis of data from 2003-2008. Over the same five-year period, Italy, Germany, the UK, Spain and the Netherlands were the countries that reported the largest number of contaminated products from other countries. Toxins in pistachio nuts from Iran, food recalled by major supermarket chains and imported products stopped by border agencies were among the alerts included in the analysis.

Professor Naughton said the program could provide profiles of individual countries that had problems with food safety as well as identifying particular contaminants that needed investigating, such as high levels of mercury in fish. He said: "We'd like to develop the tool to create an international alert system that will provide real time information about emerging patterns and problems." The program could also be used to help prepare for malicious or terrorist attempts to contaminate food, he added.

Professor Naughton, a biochemist, worked with Dr Andrea Petroczi, a statistician, and Dr Tamas Nepusz, a computer programmer in a multi-disciplinary team.

Further information: Professor Naughton is chairman of a panel of independent experts appointed to assess the quality of the European Food Security Authority's (EFSA's) scientific activities. EFSA is the EU's food safety and security watchdog.

His research on worldwide food safety has been published by the scientific journal Plos One.