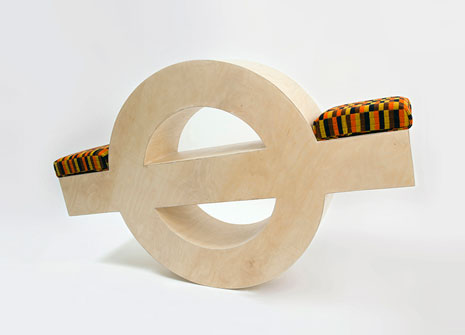 London Underground's roundel logo has sprung to life as a seesaw thanks to a creative Kingston University student. Graphic designer Clare Newsam from Chichester has transformed the familiar circle and bar logo that greets Londoners on their daily commute into an oscillating emblem with a playful purpose. She was challenged to give her own response to the iconic motif for a University project.

"I was doodling the logo when I started thinking about how getting a seat on a train isn't always possible at busy times. What if I incorporated the two ideas to make something fun and playful?" Clare explained. "It was then that I drew one person sitting on each end of the logo and the idea of the seesaw was born."

Studying as a graphic designer with a passion for prints and materials, Clare hadn't attempted any woodwork during her time at Kingston. "I decided I would try doing it myself and take lots of advice from the technicians as I went along," the 23 year old said. Clare spent two weeks in the University's workshop cutting each piece by hand. "I wasn't sure if I would be able to do it, and I think people were quite surprised I was having a go. But there are no nails in the design - it's held together by glue and, with lots of sanding, I achieved a nice, smooth finish."

With the classic circle and bar shape completed, Clare began a quest for some vintage tube train moquette fabric to cover her seesaw seats. On a trip to the London Transport Museum she discovered she could buy cushions made from the exact orange, black and brown geometric material she required. "I bought two cushions of 1978 District Line material and took them apart," Clare said. "This hard-wearing design is very familiar to Londoners because it went on to be used on the capital's buses too. I hadn't attempted any upholstery before either so I studied the te 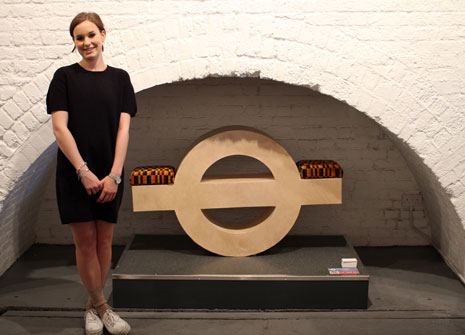 chniques of some product and furniture design students developing projects in the University's workshop. It worked out really well and completed my roundel."

It's more than 100 years since the London Underground's roundel logo of first appeared as the various companies that made up the capital's emerging transport network came together. Its iconic design has been reinvented and refashioned not only by the different owners of the train companies, but by famous artists from Man Ray to Eduardo Paolozzi too.

Transport for London's (TfL) head of intellectual property development David Ellis said Clare's Roundel seesaw had caught his eye with its larger than life design. "TfL supports innovation and design and regularly works with companies and colleges to develop new concepts and ideas that often take inspiration from our valuable contemporary and heritage designs," he said. "Student responses like Clare's stunning seesaw are exciting because they show how these products are being designed to capture the imagination of a new audience."

Acting course director for graphic design at Kingston University Marion Morrison praised Clare's playful response to an open design brief which had been set by visiting lecturer Patrick Burgoyne from Creative Review magazine. "We encourage all our graphic design students to seek out and understand the inherent qualities of a subject so that they can spot opportunities to apply their creativity," she said. "The students all embraced the chance to celebrate such an international and historic icon and Clare's seesaw took the 2D, static roundel and transformed it in to a 3D, moving celebration." 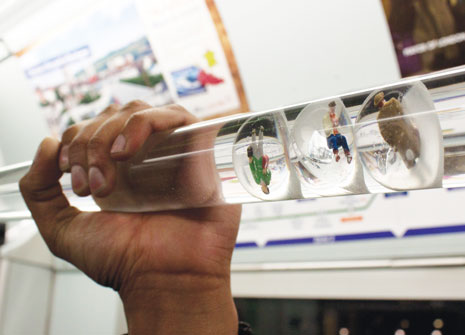 University architectural historian Dr David Lawrence, who is also a research fellow at the London Transport Museum, was similarly intrigued by the concept. He described it as a simple and stunning interpretation of London Underground's heritage. "Clare's creation works with the wit and inventiveness that typifies the best of London Underground design. The smart move of turning a symbol in to a seat for two, clearly referencing transport and the city, deserves to take the roundel seesaw far," he said.

Clare's seesaw isn't the only tribute that has been made by Kingston University graphic design students to the transport network's 150th anniversary year. Thomas Farrall's ‘Underground Retreat' tubes capture miniature model commuters in their own tiny resin bubbles to create a see-through water-filled hand rail for use on trains. "When I'm on the tube, I like the fact that for that journey, my phone doesn't go off and I can just immerse myself in my music in my own little bubble," the 22 year old from Brighton explained.

Meanwhile, graphic design and photography student Joana Galvao has come up with the idea for a mobile phone app that would guide tourists around London to cultural-themed attractions dotted around the tube map, covering countries from Brazil to India. "With London's diversity, you don't need to go far to experience other cultures," Joana said. "My *inLondon app would allow visitors to make a beeline for specific destinations including restaurants, museums or galleries related to a particular country." To illustrate her concept, she recreated mini tube map leaflets to highlight the stops on her guide.

The London Underground map is the copyright and roundel logo the trademark of Transport for London (TfL). TfL intellectual property is reproduced with kind permission. 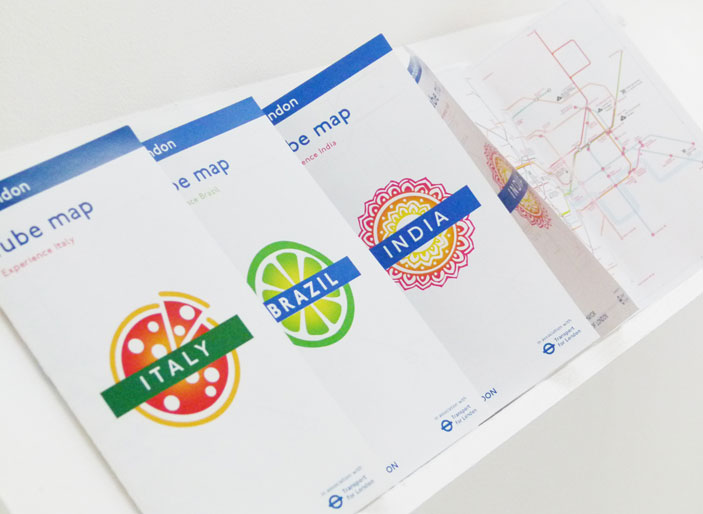