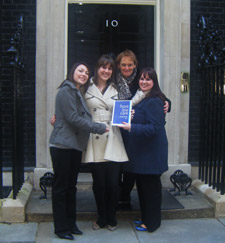 Three healthcare students have unexpectedly found themselves on the guest list for the launch of a major Government report. Natasha Farnon, Jessica Cannon and Louise Edwards mingled with MPs, Westminster officials, senior policy-makers and even the Prime Minister himself when the recommendations of the Commission on the Future of Nursing and Midwifery were unveiled at Number 10 Downing Street earlier this month.

The students, all completing courses at the Faculty of Health and Social Care Sciences run by Kingston University and St George's, University of London, still cannot quite believe they witnessed such a momentous occasion in health service history. Looking on as Prime Minister Gordon Brown outlined his determination that nurses and midwives must take centre stage in driving forward high quality, compassionate care had been enormously inspiring, they said.

They were accompanied to Downing Street by Faculty Dean Professor Fiona Ross, who served as an expert adviser to the Commission. "The call only came through on the Monday evening and by the next morning I was pinching myself as I was being ushered into Downing Street," 28-year-old Natasha, a first-year midwifery undergraduate from Croydon, recalled. "To find myself in the same room as Gordon Brown and his wife Sarah, listening to him speaking so supportively about the role that all midwives and nurses could and should play in boosting standards was an absolutely amazing opportunity. It made me feel even more committed to midwifery as a career." Natasha, who is about to embark on a five-week training block at Croydon's Mayday Hospital, hopes to work as a community midwife once she qualifies. "I see being involved in such an important part of a woman's life as a huge honour and I'm really pleased the Commission's report has stressed that midwives and nurses must act as champions for care," she said.

Listening to the Prime Minister, Secretary of State for Health Andy Burnham and Health Minister Ann Keen, who chaired the Commission, speak passionately about the work of nurses and midwives also left a lasting impression on Jessica, 26. "I was particularly interested to hear the message that patient care and high standards aren't just management responsibilities but obligations that fall to all of us," the 26 year old from Teddington, who is in the second year of a Diploma in Adult Nursing, said. "I also felt there was a really strong understanding that students like me need to be valued because we are the future of nursing and we should be given the very best education and training opportunities possible." 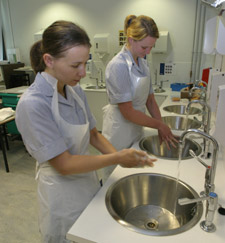 Meanwhile the Commissioners' calls for immediate steps to be taken to strengthen the role of the ward sister and charge nurse struck a chord with fellow Adult Nursing Diploma student Louise. The 27 year old from Kingston eventually hopes to specialise in accident and emergency nursing and believes good team leaders will be crucial to helping her carry out her duties in what will inevitably be a demanding work environment. "As someone just starting out on my career, it's good to know that the role of nurses and midwives is genuinely regarded as being important at senior Government levels and it's recognised that we must have the right management support as we work together to raise standards even further," she added.

Professor Ross praised the Commission for making strong recommendations about leadership at the point of care. They were particularly pertinent given the findings about nursing failures highlighted in the independent inquiry into the Mid Staffordshire Foundation Trust, she said. The ward sister, charge nurse and midwifery and community nursing team leaders would be vital linchpins in raising care standards, she added. "For too long, these essential roles have been denuded," Professor Ross said. "Strong clinical leadership is absolutely crucial to get the best out of staff working in complex and emotionally-demanding roles and to ensure patients receive the compassionate care they deserve."

The Commission's report, Front Line Care, is the first overarching review of nursing and midwifery in England since the Briggs report was released in 1972.

Find out more about our courses in nursing and midwifery.