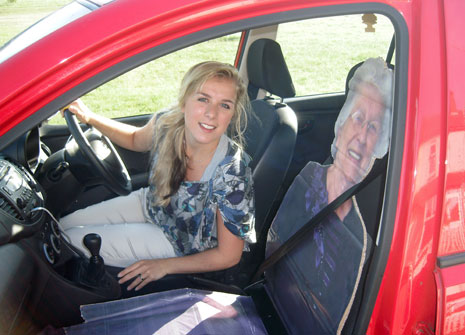 There's nothing like catching sight of grandma's beady eye to make a young driver pay attention to the speed limit or take a little extra care approaching a roundabout. But what if granny was always there, sitting in the passenger seat, keeping watch over those three point turns and reverse parking manoeuvres?

A graphic design student from Kingston University has come up with a novel way to harness grandparent power and encourage young drivers to be more safety conscious. Mollie Courtenay has developed a package of ideas to persuade those in their late teens and early twenties to take extra care in the driving seat. She even decided to create a life-sized cut-out of her own grandmother, Janet Allum, which she belted into her passenger seat and drove all the way to Brighton.

"Granny and I got a few funny looks at the petrol station when I stopped to fill up," the 22 year old from Bourne End in Buckinghamshire quipped - but there is a serious point behind Mollie's flat pack gran. "I spoke to lots of young people about what influences their behaviour behind the wheel. Many agreed one of the things that made them drive more carefully was having their grandparents in the car with them." Some said they turned their music down, others said they gave the car a tidy and most said they drove slower so their prized passenger felt safe, Mollie explained.

Mollie developed her cardboard cut-out creation in response to a brief set by the Royal Society of Arts. It asked design students to come up with ways to influence young drivers' behaviour to reduce accidents and bring down the cost of insurance premiums. After carrying out research involving police officers, parents of young drivers and motorists themselves, Mollie came up with initial plans for her off-beat road safety website. She foresees the online resource being filled with interactive tools and safety advice delivered in a light-hearted and quirky way to appeal to young drivers. Visitors could also order their own, life-sized granny passengers by uploading their photos to the site. 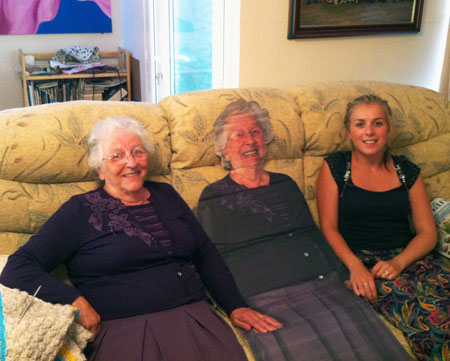 e advice the young motorists could tap into includes simple tips such as carrying a snack in their car as hunger has been shown to make some drivers behave more erratically. They could also enter a competition to win a whole car-full of munchies. There would be a facility for users to create their very own play list of relaxing drive time tunes to keep them calm in the car and Mollie has even come up with the idea for an app which allows people to personalise their sat nav systems. "It would allow drivers to record journey-specific directions in a trusted, familiar voice - with the added bonus of subtle safety advice," Mollie explained. "So, for example, your Gran's voice could guide you home with little asides like ‘turn in to your road but be careful if it's windy as the bins may have blown in to the street'."

Kingston University's acting course director for graphic design Marion Morrison said Mollie's project struck the perfect balance between serious safety advice and youthful appeal. "At Kingston we believe graphic designers can be at the heart of finding innovative solutions to everyday problems. We want our students to think big and broad, but also think breakthrough - to have the confidence to totally reinvent the way an issue is tackled," Ms Morrison said. "Mollie's ideas have the potential to really resonate with her target audience. Her creative and quirky approach to delivering serious road safety messages is cleverly designed to appeal to young drivers."