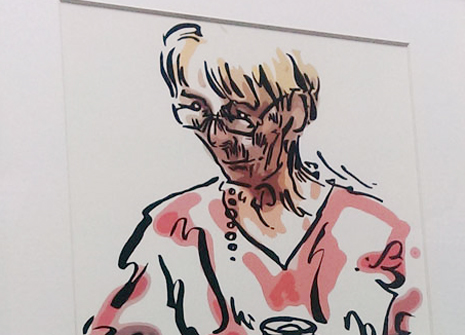 A film and exhibition of artwork exploring the challenges of caring for people with mental health issues has gone on show at Kingston University. The work, by artist and film maker Alban Low, is titled Eternal Art of the Simulated Mind. It is based on his observations of a simulated mental health ward created by Kingston University and St George's, University of London, as a training tool for student nurses.

Mr Low was granted exclusive access to second year mental health nursing students as they practised responding to patients in real-life situations, with actors playing the role of mental health service users. The artistic exploration was the brainchild of Harvey Wells, senior lecturer in mental health nursing at the Faculty of Health, Social Care and Education, run jointly by Kingston and St George's. "There is a lot of mystique and stigma around mental health - if you're not involved in it, it's hard to know what we, as professionals, do," Mr Wells explained. "I thought it would give an interesting insight to have an artist - someone unconnected to the sector - come and see some of what goes on in a ward environment." Mr Wells said the artist had captured the energy and dynamism of the situation and brought the clinical experience to life.

"It was a unique experience for any outsider," Mr Low said. "It's a high octane environment where students apply their mental health skills in a simulated live ward situation." As a regular sketcher on the music circuit, Mr Low said he was no stranger to live performances but conceded nothing could have prepared him for such an emotionally charged assignment. "Watching the students diagnosing, managing and interacting with not only one patient but several in a pressurised ward scenario I felt surprisingly uneasy," he said. "As the role of patient was played by actors, you would think this would be like a normal performance where the audience just sits and watches on. That was not the case. The anticipation was palpable."

The simulated ward environment is part of a groundbreaking new approach to mental health nurse training launched by Kingston and St George's which also draws on art, poetry and film to help students develop the practical skills needed to work with patients.

As part of the Clinical Simulations and Mental Health Skills' Development Programme, which was named teaching innovation of the year at the inaugural Student Nursing Times' awards in 2012, students also look at the way attitudes to mental health are portrayed in popular culture - such as the Oscar-winning film A Beautiful Mind. The idea behind immersing themselves in the arts is to help students approach the often complex and demanding area of nursing from a different perspective. 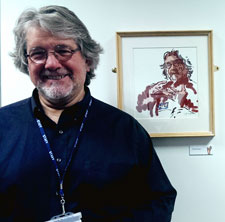 "Traditionally students are being educated in classrooms and lecture theatres, when not learning out on placements, but mental health nursing is about people's relationships and it's vital for all mental health professionals to be practising this. Learning in a simulated environment enables students to make mistakes in a safe setting and learn from them," Dr Julia Gale, Head of Nursing at the Kingston and St George's joint Faculty of Health, Social Care and Education, said. "This programme directly addresses the need to instil in our students the importance of attributes such as compassion and empathy in delivering excellent patient care. We strive to equip them with the tools they will need to work with people who are distressed in an effective and sensitive manner," she added.

Mr Low's animated film Eternal Art of the Simulated Mind premiered at the British Film Institute at the start of July as part of the fourth Walthamstow International Film Festival. It was also shortlisted for the animation award at the event. The four-minute short was also screened at Kingston University to coincide with the opening of the exhibition which features 18 portraits and sketches by Mr Low. The artwork is now on permanent display at Kingston University's Kingston Hill campus.