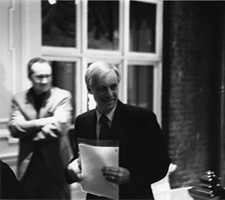 A complete series of 99 artworks by Dr Henry Bond, senior lecturer in Photography at the School of Fine Art, has been acquired by the Tate Gallery to add to its national collection of contemporary art.

Entitled Documents, the series records 99 press conferences, press launches and photo opportunities that took place between 1990 and 1995. Each event is documented by a single photograph and a page of explanatory text. The events include Prince Charles opening a decorative garden, two Russian cosmonauts giving a press conference and a crime statement from New Scotland Yard.

"By appropriating news events for the art gallery, we strip them of their news context and original function," said Henry. "Most of the images were not exhibited for months or even years after the event had taken place."

Henry worked on the project with the artist Liam Gillick, a fellow fine art graduate from Goldsmiths, University of London in the late 80s. They started working on Documents in 1990, when they became reacquainted after they both exhibited work with the successful art dealer and Britart champion Karsten Schubert at his Charlotte Street gallery in Fitzrovia. 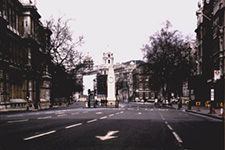 By 1995, the pair had exhibited in London, Barcelona, Milan and Madrid; and were invited to exhibit the complete series of 99 works at the prestigious Walker Art Center in Minneapolis, US. It was this set of images that the Tate Gallery acquired for their permanent national collection of contemporary art. The gallery already had one of Henry's photographs in its collection, so it now holds 100 of the Kingston academic's pictures for the nation.

The Tate Gallery holds the national collection of British art from 1500 to the present day as well as a collection of international modern and contemporary art. It includes around 70,000 artworks by over 3,000 artists and is growing.