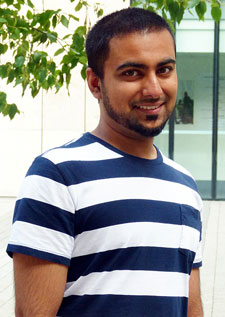 A young businessman has credited a degree education with setting him on the path to an exciting new career - and coming to Kingston University through Clearing has sealed the deal.

Zuber Mohamed initially signed up to study economics and finance in London while he managed his own business venture designing and importing clothing. One year in to his course, however, he realised they weren't the subjects for him. "I'd already set up a successful company and I didn't feel my studies were really helping me develop my skills any further," he said. "I'd studied psychology at A-level though, and had found it intriguing. I realised that was what I needed from my degree studies too. They needed to captivate me in the same way, so I took the tough decision to start all over again and apply for something new."

Having submitted his application late, Zuber discovered he needed to go through the Clearing system to get a fresh place at university. "I made the most of the time I had to research where it was I wanted to go," the 23 year old from Streatham added. "I saw that Kingston offered an interesting psychology programme and that it was perfectly situated on the edge of the capital. The location really confirmed my decision. If I could get a place there, I knew that would be the right course for me."

Armed with A-levels in chemistry, intensive sociology and AS-levels in maths and biology as well as his psychology result, Zuber felt confident calling the Clearing hotline. "I saw Kingston as an up-and-coming University and that seemed to match where I was at in my own life. I had a strong feeling that there would be support available for a student like me who was setting out on a new path," he said. He phoned the Clearing hotline on the first day it opened and was offered a place straight away.

With his heart now set on becoming a clinical psychologist, Zuber realised early in his studies that he would need to get as much research experience as possible to top off his lecture theatre learning. After taking the initiative and making some inquiries he has joined Dr Claudia Uller in Kingston University's Infant Cognition Centre, to work on research examining how children's mathematical understanding develops. 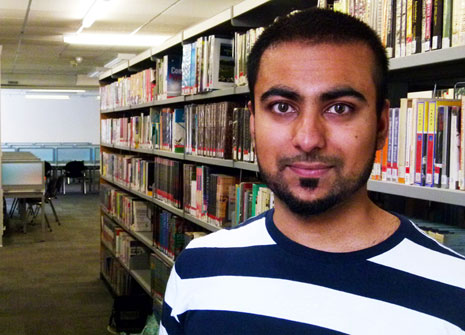 Dr Uller, who is Kingston's Director of Studies for psychology, said Zuber had taken advantage of every opportunity available to get the most from his degree. "I've found I can give him any task and he will not only get it done to a professional level, but if he doesn't know something, he'll get the extra research done so that he can complete it," she said. "That level of maturity in a student makes them stand out from the crowd."

Zuber's role as a student representative for the course was another example of his wholehearted involvement in university life, Dr Uller said, and a perfect complement to his academic achievements. "He's an exceptional listener and he represents the interests of his fellow students with passion," Dr Uller added. Zuber's developed outstanding employability skills since he's been at Kingston and really focused on every aspect of his studies which I'm sure will make him a success in whatever he chooses to do. We're so glad he came to Kingston and gave university studies a second chance."

Studying psychology at Kingston has also inspired Zuber to take his new skills and use them to help others at mental health charity SANE. "Organisations are looking to employ graduates as a whole person, well-rounded and with diverse interests. I really enjoy helping other people and the best advice I can give to anyone making important decisions about their futures at the moment is to make sure you do your research and get yourself on the course that's truly right for you."