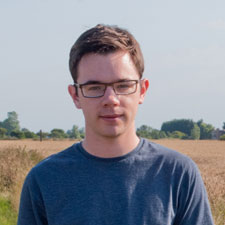 Final year Kingston student Jack Holmes can't stress enough the importance of studying the right degree course. The 21 year old comes from a family of farmers on Kent's Romney Marsh - none of whom went to university - so they were surprised, but supportive, when Jack decided his future didn't lie with cows and chose to head off to pastures new.

Jack enrolled at London's Kingston University on a straight business studies degree, but was quickly cherry picked by his tutor for his outstanding computing skills and encouraged to transfer on to the business information technology degree. He hasn't looked back since and earlier this year even won a prestigious student scholarship to attend the User Experience Professionals Association international conference in Washington, D.C.

The scholarship, funded by PayPal and Walmart Labs, was open to students from around the world. Jack was one of only six winners to secure a coveted award by producing a video outlining why he had developed a specialist interest in this area. "User experience is all about people's perceptions and responses to the new technologies changing the way we live," Jack explained. "It was fantastic when the judges said they were impressed by my suggestions for championing IT development and testing in the corporate world."

During his trip to Washington, Jack rubbed shoulders with high-profile business people and shared ideas with his six fellow competition winners who came from all four corners of the globe. He even found time to make a quick trip to San Francisco to visit some new business start-ups.

Jack's drive and success is all a far cry from where he was at after finishing his A-levels. "I wasn't very systematic looking for a university degree course to study so I didn't hit on the right subject to begin with," he admitted. His top tip for prospective students is to find a topic they feel passionate about. "Do what you want, not what your friends are doing," he advised. "You may not know them in years to come, but you'll be stuck with your degree choices."

While studying, Jack has worked at several large organisations including O2 and Port Lympne Wild Animal Park but found placements at smaller, feeder companies most useful as training grounds. He believes internships are a great way for students to get some valuable experience under their belts and doesn't think pay should be the first consideration when weighing up whether to take up an opportunity in a company. "Never mind what you earn when you're 18 to 20," he said. "Focus on what you want to do in the future."

It was also really important not to just sit back and coast through degree days, Jack said. "Turn up to your lectures because those who turn up, pass, and those who don't, don't - it's that simple," he urged. "Think about the cost per lecture if that helps motivate you to get the most out of your degree." Jack is now looking forward to finishing his course next year and harvesting the benefits of his hard work.