Kingston University's electric bike has sped into the record books, clocking up 160 miles per hour at York's Elvington Airfield. The University's director of automotive and motorsport engineering, Paul Brandon, said clinching the United Kingdom land speed record for electric motorbikes over a one mile distance was a significant milestone for the team responsible for developing the latest model in the laboratories at the Roehampton Vale campus.

Kingston University's Isle of Man TT racer George Spence was in the hot seat for the four attempts to carry off the record. "Our aim for the day was to set a speed over the timed mile of between 150 and 160mph," Mr Brandon explained. "George took the first run fairly easy as he hadn't participated in an event like this before and set a speed of 144.9mph. We made a few changes and sent him out for a second run where he clocked 149.6mph. After another few adjustments, the third run hit 150.1mph."

Although on paper the calculations showed the bike was capable of around 160mph, further tweaks were needed to ensure it could rise to the challenge. "We decided on a new set up, made the changes and sent George out for his final run. When he crossed the timing beam the display showed 160mph exactly which was a really fantastic achievement," Mr Brandon said. "Not only had we smashed the existing record by over 40mph but the bike had achieved precisely what the calculations had shown it was capable of - something that is even more rewarding than the actual record from an engineering point of view." 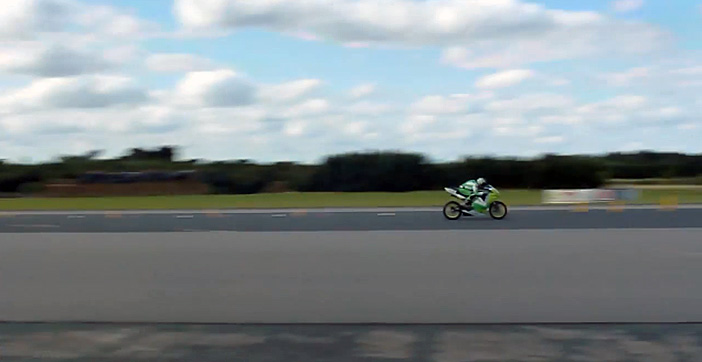 The latest triumph comes just weeks after Kingston's electric bike smashed three seconds off the existing record for the fastest electric bike on the famous Santa Pod quarter mile drag strip in Bedfordshire. It achieved a time of just 11.194 seconds.

The staff and students behind the bike have no intention of resting on their laurels and already have their sights set on new targets. "There is still plenty more to come with one of our students working on a new low drag fairing that will allow us to challenge for speeds in excess of 200mph," Mr Brandon said.