A 12-course gourmet meal sounds like the ultimate extravagance, but not when it's served up a la Chris Godfrey. From pickled kobe beef with charred strawberry and roast pork belly with celeriac to palate cleansing pear and ginger juice, the Kingston University graphic designer has boiled down all the elements of a Michelin star-style feast into a tin can.

Chris created the gelatinous gourmet gunk as part of his dissertation. He rustled up all twelve dishes that make up the dinner himself, before reducing them down to liquid form by boiling or blending and adding water and gelatine. He then poured each course into a can, waiting for every layer to set before adding the next.

The 24 year old from Eastbourne came up with the idea for his culinary curiosity to highlight the elaborate gimmicks used by companies to market their products to bargain-hungry consumers. "It really is a 12-course meal, but it sounds a lot more desirable than it actually is - that's the whole point," Chris explained. "I wanted to make a statement about the trappings of consumerism and suggest people should be a bit more sceptical of offers and deals. In our culture we just buy, buy, buy if we think we're getting a bargain, but perhaps we all need to question whether things really are as good as they sound and consider the wider impact of such rapid consumption." 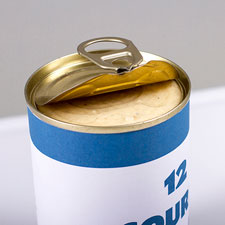 Despite family connections in the food industry, Chris conceded he's no chef. "No one wanted to taste my concoction - all my housemates declined the offer and I didn't fancy it myself. Although the ingredients sound luxurious, it didn't look very appealing," he said. Chris made a couple of prototypes before he hit on exactly the right format for his tinned feast. "Initially I used a jelly mould, but my tutor, Cathy Gale, said it looked too beautiful," he said. The idea of putting the meal in to a can came to him in a flash of inspiration - a clever nod to Andy Warhol's take on consumerism and how commercial packaging can turn mundane household objects into desirable items.

Chris has just returned from a couple of months in New York where embarked on his next project - a continuation of his work on consumerism, but this time focussing on souvenirs. The young designer, who sees his future lying at an advertising agency as an ideas man, said he's very excited about what lies ahead for him in his fledgling career and credits his degree studies with helping to shape his unusual take on design briefs. "Kingston University students learn pretty quickly that the simple answer is not what our lecturers are looking for. From my very first assignment I was really pushed to approach projects from new and different perspectives and encouraged to explore a variety of media - that's why I ended up handing in a tin of processed food as part of my coursework," he said. "This experience is invaluable as it means students aren't afraid to try something out of the ordinary when they're working in the industry. Kingston graduates already have that innovative way of thinking instilled in them."

Acting course director Cathy Gale said it had been fascinating to witness the result of Chris' research into TV meals and their advertising and his determination to capture the all-in-one mode of modern-day consumption. "By employing a rigorous and self-reflective approach to this project, Chris has succeeded in saying a lot with very little. The meal intrigues because it is both a critique of consumption and a believably real foodstuff in its own right - it attracts and repels in equal measure," Ms Gale said. "That we can all imagine this product on our supermarket shelves is a testament to the thorough consideration Chris has given to the message and its construction." 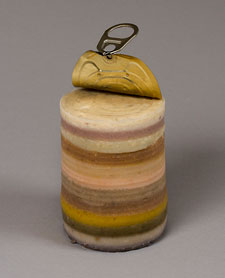