Study highlights scale of continence problems among people with dementia 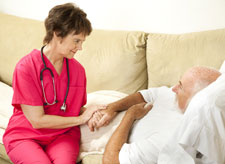 The research, published in leading journal PLOS Medicine, analysed the records of more than a quarter of a million patients in The Health Improvement Network - a database of nearly 500 British primary care practices. Data captured between 2001 and 2010 relating to around 55,000 people with dementia was compared with information from almost 200,000 people without the condition.

Led by Robert Grant and Vari Drennan from the Faculty of Health, Social Care and Education at Kingston University and St George's, University of London, the study was a collaboration with Professor Steve Iliffe and colleagues from the Research Department of Primary Care and Population Health at University College London. It showed people with dementia experienced approximately three times the rate of diagnosis of urinary incontinence and more than four times the rate of fecal incontinence compared to those who did not have the condition.

Incontinence was a common problem for people living with dementia in the community and highlighted the need for good quality services, including advice and support for carers managing incontinence, Mr Grant said. "With an ageing population, providers and planners of dementia services should anticipate high levels of need," he added. "Some aspects of clinical management of urinary incontinence are different for patients with dementia compared to those without. Further study is required to understand the clinical reasoning of health care practitioners providing care for this population, particularly in the use of indwelling catheters, given the known risks," he added.