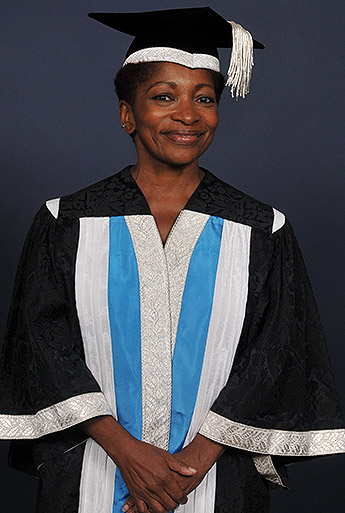 Kingston University's new Chancellor Bonnie Greer has made an impassioned plea for higher education to be regarded as a human right rather than a privilege.

Speaking during her inauguration ceremony at the Kingston Hill campus on 17 September, the award-winning playwright, novelist and critic emphasised the importance of university study, not just in the lives of young people but in society as a whole. "You can't ever learn too much and humans have an infinite capacity to learn," she said. "You cannot run a 21st Century economy and nation without having young people educated to the highest level. It is they who are the future, not the Government of today."

Education would prove even more vital during challenging times in which the axis of power was shifting to a different hemisphere, she predicted. "Universities such as Kingston are the nuclei of people's energy, of the future. They are about values, scholarship, thinking and pushing the boundaries of human possibility in every way," Ms Greer said. "We cannot, in this age, think of our lives as they were. We have to see the way the world is now and prepare our young for their future and the future of this great nation."

Ms Greer added that she was looking forward to getting involved in activities right across Kingston University's four campuses in south west London. "To be at the service of the young, of the future, is the highest calling anyone can have," she said. "Kingston University is, for me, the perfect match."

Named one of the United Kingdom's top 300 public intellectuals by The Observer in 2011, the Chicago-born writer has penned more than a dozen plays for BBC Radio, a short film for BBC2, a documentary for BBC television, two novels and a biography of writer and social activist Langston Hughes. She is a regular contributor to the Paper Review on Sky News, BBC2's The Review Show and Radio 4's Any Questions, and writes occasionally for the London Evening Standard, Guardian and Telegraph. Ms Greer has lived in the United Kingdom since 1986 and was awarded an OBE in the Queen's Birthday Honours list in 2010 for her contribution to the arts.

Reflecting on her own early experiences of the education system in the United States, Ms Greer paid tribute to her late father, Ben, a sharecropper from the impoverished Mississippi Delta. She credited him with instilling the importance of learning and knowledge in her. "He always told us that they can take everything from you but what you know. He was a stickler for education and made me love reading and love learning," she said.

Ms Greer held that advice close as she juggled six years of part-time work and studies before graduating with a Bachelor of Arts. "I know what it's like to work and pay for your education, to have to figure out how to pay a bill, to have to hold down a job, how to study at night because you're working during the day and how to stay up at night so you can make your day classes," she told the investiture audience.

In a voice trembling with emotion, she recalled the moment when one of her professors had 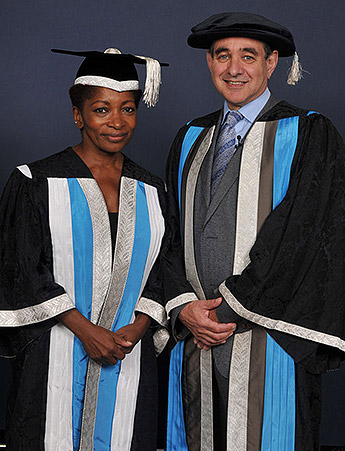 come to her rescue when she was so hard up she had no money to pay the fees for her next semester. By chance he was standing behind her and stepped forward to give her the money from his own pocket.

She urged students heading to university for the first time this month to make the most of all the opportunities that would come their way. "Vote. Take part. Show your muscles. Make your future. It can be done. You are the future," she said.

Vice-Chancellor Professor Julius Weinberg said Ms Greer was a powerful advocate for higher education and an outstanding role model for students. "Bonnie Greer is someone who has shown enormous leadership in the arts, is passionate about the sciences and has made a stand for the power of free speech and civilised argument," he said. "She represents all the values that are important to Kingston University - somewhere where lives are changed, opinions challenged and where we believe learning can make the world a better place. Bonnie Greer will be a truly inspirational Chancellor - one who lives and speaks the experiences of so many of our students."

Ms Greer has succeeded internationally-acclaimed theatre director Sir Peter Hall as Kingston's Chancellor. Sir Peter has now assumed the role of Patron of the University. She was also named an Honorary Doctor of Letters during the ceremony in recognition of her significant contribution to writing and promotion of debate in modern society.