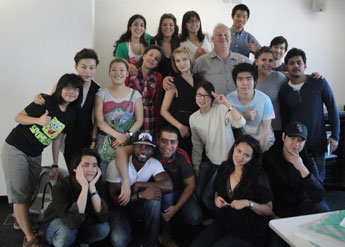 Postgraduate students from Kingston University's Design School have paid tribute to an influential educator and leading design researcher in their final MA show. Ian Noble, who died unexpectedly in January, played a pivotal role in helping Kingston's latest crop of design graduates achieve their postgraduate qualifications and many credit him with rousing in them a passion for the profession few others could inspire.

Called Don't Ask for Permission, the show took its name from an irreverent phrase Mr Noble was often heard uttering to his protégés. The latest crop of graduating Masters students, many of whom were deeply affected by his sudden death, felt the words encapsulated the ethos and the spirit he passed on to them.

Mr Noble had a formidable reputation in the world of design. He taught thousands of students, wrote one of the definitive textbooks on graphic design and played an important role in shaping teaching at two of London's largest design schools during more than two decades in education. At the time of his death, he was acting Academic Director for Communication Design at Kingston University. He had joined the University in 2010 to lead its MA in the subject after 13 years at the London College of Printing.

Kingston graduate Jasper Sutherland, who has just completed his MA in Communication Design, recalled how he was persuaded to sign up for the course after a meeting with the much-loved lecturer. "Ian Noble was the reason I came to Kingston. My undergraduate degree was in international relations and, although I'd been involved in lots of design work in my spare time, I wasn't sure whether an MA was something I could do," the young designer from Camberwell said. "Ian and I spent three hours talking - not just about the course but about graphic novels, a shared love of Brighton and many other things. He spoke at 100 miles per hour and used 50 words when one would do." 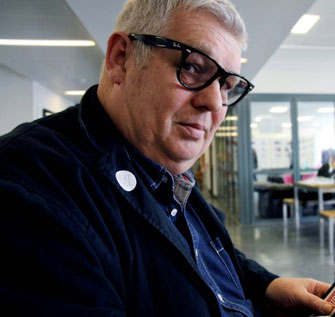 hroughout his studies Mr Noble gave Jasper the impression he had confidence in him, which, in turn, gave the 27 year old belief in his own ability. "Ian had a huge influence on my attitude towards the creative industries and my understanding of what type of designer I could be," Jasper said. "I don't make sense on paper and Ian reassured me this was ok. He encouraged all of his students not to limit themselves - to think of themselves as designers and communicators and to make use of all the tools at their disposal."

Widely published in a number of influential design magazines and academic journals, Mr Noble wrote Picture Perfect - a study of contemporary international illustration released in 2003. In 2005, he wrote the textbook Visual Research with fellow designer and friend Dr Russell Bestley, with whom he ran a design agency of the same name. The book rapidly became required reading for students on undergraduate and postgraduate courses around the world.

Mr Noble had a clear vision of the purposes of postgraduate study. He described MA design as "a problem-finding activity", adding: "The purpose of the MA research question is to get a better research question - to achieve a better understanding of what is possible, effective and appropriate". One former student recalls that, when asking him to autograph a copy of Visual Research, he produced a stamp reading ‘Try to make more mistakes'.

Exhibits in Kingston University's Design School MA Show, Don't Ask for Permission, were first unveiled on 10 September at Park Village Studio in Regent's Park. They included work by graduates from MA Communication Design - both the graphic design and illustration pathways - MA Design: Product and Space and MA Design for Development. The students showcased their work again from 20 to 22 September at The Rag Factory, off Brick Lane in East London.