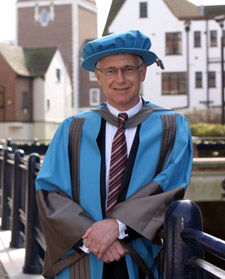 He has dedicated his professional career to bringing to life the stories of great people and places from the nation's past, but last week attention focused on Michael Day himself as he marked a special chapter in his own personal history. The chief executive of Historic Royal Palaces was made an Honorary Doctor of Arts by Kingston University in South West London in a ceremony held at the Rose Theatre.

Through his work as head of the independent conservation, heritage and education charity responsible for five of the country's most important historic sites, including Hampton Court Palace and the Tower of London, Mr Day has inspired more than three million visitors a year to learn more about the lives of some of our most colourful historical characters. Throughout a career that has taken him from Norfolk Museum Service, via the Ironbridge Gorge Museum and Jersey Heritage Trust, to the ultimate in royal luxury at Hampton Court Palace, Mr Day has always been motivated by the belief that heritage was about people, rather than inanimate objects or collections. Bringing together artists and performers in creative collaborations to tell the stories of these people has been, Mr Day believes, one of his most important achievements.

"The institutions I have worked in hold society's memories, and I think these are communicated best through the time-honoured medium of stories - stories told in many different ways through diverse creative people," he explained. "If I have done something to deserve this honour, it has been to create and lead organisations that have encouraged new creative input and collaborations in pursuit of great story-telling." 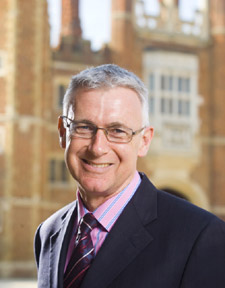 Testament to his belief in collaboration, Mr Day was instrumental in developing a formal partnership between Kingston University and Historic Royal Palaces to share expertise and research. Following a three-year knowledge transfer partnership project to mark the 500th anniversary of Henry VIII's accession to the throne last year, developing links with Historic Royal Palaces has been of increasing importance as the University has expanded its range of heritage-related courses. The first cohort of students from its undergraduate degree in Museums and Galleries Studies will graduate this year, and an MA in the same subject, as well as two new courses in historic building conservation, has recently been launched.

Head of the School of Art and Design History, Helen Potkin, was thrilled that the University had chosen to recognise Mr Day's contribution to the heritage sector, and said that the partnership he helped to secure with Historic Royal Palaces would offer Kingston students new opportunities to get involved in important projects. "Michael has had a great impact on the museum world through his approach to interpreting collections and it's great that Kingston University has chosen to recognise his work. By bringing cultural institutions together with experts and practitioners from the field of art and design he has helped to help to bring heritage to new audiences," she said. "Michael has also been influential in strengthening the links between Kingston University and Historic Royal Palaces." She explained that these links would offer students exciting opportunities to get involved in projects that had the potential to influence how some of the country's most important historical sites were presented and interpreted.

Receiving his award, Mr Day said he saw universities and heritage organisations as natural partners, and stressed how important he believed institutions like Kingston were in inspiring students. "I have an inspirational tutor to thank for introducing me to what became, for me, the fascinating field of museums and heritage," he said. "This seems to me to be one of the great values of universities - opening up possibilities for students at a life stage when they can take many different directions."

Mr Day became chief executive of Historic Royal Palaces in 2003. The charity is responsible for the care of and public access to the Tower of London, Hampton Court Palace, Kensington Palace, Kew Palace and the Banqueting House, Whitehall.  He arrived there from Jersey Heritage Trust, which he led to the title of UK Museum of the Year award on two occasions. A Fellow of the Museums Association and the Royal Society of Arts, he is also on the board of the government's Cultural Leadership Programme which promotes excellence in leadership in the creative and cultural sectors.